We Beat the Street: How a Friendship Pact Led to Success (Paperback) 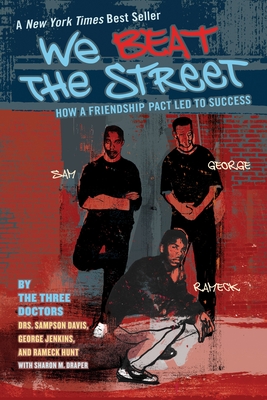 We Beat the Street: How a Friendship Pact Led to Success (Paperback)


Out of Stock - Please contact store for availability and price
Growing up on the rough streets of Newark, New Jersey, Rameck, George,and Sampson could easily have followed their childhood friends into drug dealing, gangs, and prison.  But when a presentation at their school made the three boys aware of the opportunities available to them in the medical and dental professions, they made a pact among themselves that they would become doctors.  It took a lot of determination—and a lot of support from one another—but despite all the hardships along the way, the three succeeded.  Retold with the help of an award-winning author, this younger adaptation of the adult hit novel The Pact is a hard-hitting, powerful, and inspirational book that will speak to young readers everywhere.
George Jenkins, Sampson Davis, and Rameck Hunt grew up together in Newark and graduated from Seton Hall University. Davis and Hunt received their medical degrees from the Robert Wood Johnson Medical School, and Jenkins received his dentistry degree from the University of Medicine and Dentistry. The three doctors are the recipients of the Essence Lifetime Achievement Award. All three continue to live in Newark.