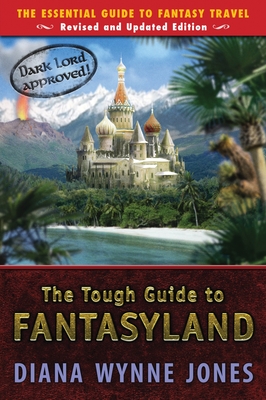 
OUT OF STOCK - Please contact store for expected availability
The definitive edition of a cult classic by the legendary Diana Wynne Jones.

Imagine that all fantasy novels—the ones featuring dragons, knights, wizards, and magic—are set in the same place. That place is called Fantasyland. The Tough Guide to Fantasyland is your travel guide, a handbook to everything you might find: Evil, the Dark Lord, Stew, Boots (but not Socks), and what passes for Economics and Ecology. Both a hilarious send-up of the cliches of the genre and an indispensable guide for writers, The Tough Guide to Fantasyland has been nearly impossible to find for years. Now this cult classic is back, and readers can experience Diana Wynne Jones at her very best: incisive, funny, and wildly imaginative. This is the definitive edition of The Tough Guide, featuring a new map, an entirely new design, and additional material written for it by Diana Wynne Jones.

Diana Wynne Jones was the multiple award-winning author of many fantasy novels for children, teenagers, and adults. Her book Howl's Moving Castle was made into an Academy Award-nominated major animated feature by Hayao Miyazaki. She received the World Fantasy Lifetime Achievement Award in 2007. Married to the medievalist J. A. Burrow, with whom she had three sons, she lived for many years in Bristol, the setting for many of her books. Diana Wynne Jones passed away in March 2011, after a long illness.
"This brilliantly written satire perfectly celebrates and skewers the clichés of the fantasy genre. It is a highly recommended purchase…." —VOYA