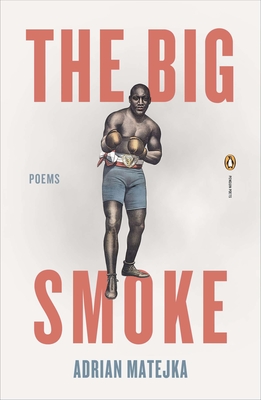 
OUT OF STOCK - Please contact store for expected availability
A suite of poems examining the myth and history of the legendary prizefighter Jack Johnson—a finalist for both the Pulitzer Prize and the National Book Award—from the author, with Youssef Daoudi, of the graphic novel Last on His Feet: Jack Johnson and the Battle of the Century

The legendary Jack Johnson (1878–1946) was a true American creation. The child of emancipated slaves, he overcame the violent segregationism of Jim Crow, challenging white boxers—and white America—to become the first African-American heavyweight world champion. The Big Smoke, Adrian Matejka’s third work of poetry, follows the fighter’s journey from poverty to the most coveted title in sports through the multi-layered voices of Johnson and the white women he brazenly loved. Matejka’s book is part historic reclamation and part interrogation of Johnson’s complicated legacy, one that often misremembers the magnetic man behind the myth.

Adrian Matejka's most recent collection of poetry is Somebody Else Sold the World. His other books are Map to the Stars; The Big Smoke, which was the winner of the Anisfield-Wolf Book Award and a finalist for both the National Book Award and Pulitzer Prize; Mixology, which was selected for the National Poetry Series; and The Devil's Garden (Alice James Books, 2003), winner of the New York / New England Award. Among Matejka's other honors are fellowships from the Academy of American Poets, the Guggenheim Foundation, the Lannan Foundation, the National Endowment for the Arts, and United States Artists. He served as Poet Laureate of the state of Indiana in 2018-19 and lives in Indianapolis, Indiana.

Praise for The Big Smoke

“Just as we finally get a grip on the volatile Jack Johnson, Adrian Matejka, in his collection of poems, The Big Smoke, gives us a man wrestling with myth. He assays a figure bigger than life, and we see a legend shaped by American history—heroic and antiheroic—that is humanized by moments of poetic exhilaration as well as downfall. This poet’s Jack Johnson is made of sweat, blood, and vulnerability. Unadorned and honed, the poems in The Big Smoke are seasoned with easeful authority but jaunty as the Eagle Rock.” —Yusef Komunyakaa, author of The Chameleon Couch

“In this revelatory work, Adrian Matejka makes a chamber opera out of the highly mythologized and often deeply misunderstood life of Jack Johnson. Through the virtuosic interplay of voices, Matejka forces us to interrogate our own complicity in making histories that focus on the prize fights and the flashy cars while ignoring (and perhaps abetting) the intimate struggles and losses, the cruelties occurring in the places we call home, that make the rifts in our lives and our country deepen. This is a startlingly human book whose gorgeous language never keeps us from the harder truths and myths that make and unmake all of us.” —Gabrielle Calvocoressi, author of Apocalyptic Swing