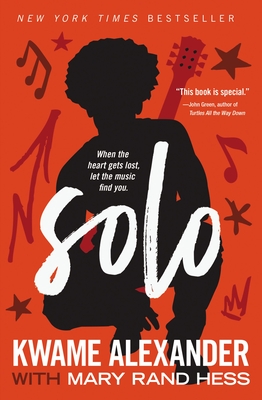 Solo by Kwame Alexander and Mary Rand Hess is a New York Times bestseller! Kirkus Reviews said Solo is, “A contemporary hero’s journey, brilliantly told.” Through the story of a young Black man searching for answers about his life, Solo empowers, engages, and encourages teenagers to move from heartache to healing, burden to blessings, depression to deliverance, and trials to triumphs.

Blade never asked for a life of the rich and famous. In fact, he’d give anything not to be the son of Rutherford Morrison, a washed-up rock star and drug addict with delusions of a comeback. Or to no longer be part of a family known most for lost potential, failure, and tragedy, including the loss of his mother. The one true light is his girlfriend, Chapel, but her parents have forbidden their relationship, assuming Blade will become just like his father.

In reality, the only thing Blade and Rutherford have in common is the music that lives inside them. And songwriting is all Blade has left after Rutherford, while drunk, crashes his high school graduation speech and effectively rips Chapel away forever. But when a long-held family secret comes to light, the music disappears. In its place is a letter, one that could bring Blade the freedom and love he’s been searching for, or leave him feeling even more adrift.

If you enjoy Solo, check out Swing by Kwame Alexander and Mary Rand Hess.

Kwame Alexander is the New York Times Bestselling author of 32 books, including The Undefeated; How to Read a Book; Solo; Swing; Rebound, which was shortlisted for prestigious Carnegie Medal; and his Newbery medal-winning middle grade novel, The Crossover. He’s also the founding editor of Versify, an imprint that aims to Change the World One Word at a Time. Visit him at KwameAlexander.com

Mary Rand Hess is a poet, mixed-media artist, screenwriter, and New York Times bestselling author of Solo and Animal Ark: Celebrating Our Wild World in Poetry and Pictures, both coauthored with Kwame Alexander.

A rhythmic, impassioned ode to family, identity, and the history of rock and roll. — Booklist (starred review)