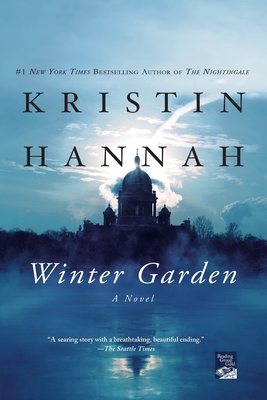 “Heartbreaking and Brilliant, Kristin Hannah has created her best novel to date, a story of a complex bound between a mother and her daughters. Hannah's characters will capture your heart and enter your soul. Amazing!”
— Summer Moser, Summer's Stories, Kendallville, IN

Mesmerizing from the first page to the last, Kristin Hannah's Winter Garden is one woman’s sweeping, heartbreaking story of love, loss, and redemption. At once an epic love story set in World War II Russia and an intimate portrait of contemporary mothers and daughters poised at the crossroads of their lives, it explores the heartbreak of war, the cost of survival and the ultimate triumph of the human spirit. It is a novel that will haunt the reader long after the last page is turned.

1941. Leningrad, a once magical city besieged by war, cut off from aid, buried in snow. A city full of women desperate to save their children and themselves…

2000. Loss and old age have taken a terrible toll on Anya Whitson. At last, she will reach out to her estranged daughters. In a halting, uncertain voice, she begins to weave a fable about a beautiful Russian girl who lived in Leningrad a lifetime ago…

Nina and Meredith sit spellbound at their mother’s bedside, listening to a story that spans more than sixty years and moves from the terrors of war-torn Leningrad under siege to modern-day Alaska.

In a quest to uncover the truth behind the story, Nina and Meredith discover a secret so shocking, so impossible to believe, it shakes the foundation of their family and changes who they believe they are.

“…a gripping read. Hannah’s audience will find plenty to discuss in this enthralling entry.”—Booklist

KRISTIN HANNAH is the #1 New York Times bestselling author of more than twenty novels, including The Nightingale, The Great Alone, and The Four Winds. A former lawyer turned writer, she lives with her husband in the Pacific Northwest.

“A . . . searing story with a breathtaking, beautiful ending.”—The Seattle Times

“It's a tearjerker, but the journey is as lovely—and haunting—as a snow filled winter's night.”—People Magazine

“Readers will find it hard not to laugh a little and cry a little more as mother and daughters reach out to each other just in the nick of time.”—Publishers Weekly