Someone Like Me: How One Undocumented Girl Fought for Her American Dream (Paperback) 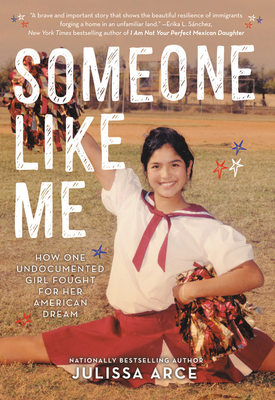 Someone Like Me: How One Undocumented Girl Fought for Her American Dream (Paperback)


OUT OF STOCK - Please contact store for expected availability
A remarkable true story from social justice advocate and national bestselling author Julissa Arce about her journey to belong in America while growing up undocumented in Texas.

Born in the picturesque town of Taxco, Mexico, Julissa Arce was left behind for months at a time with her two sisters, a nanny, and her grandma while her parents worked tirelessly in America in hopes of building a home and providing a better life for their children. That is, until her parents brought Julissa to Texas to live with them. From then on, Julissa secretly lived as an undocumented immigrant, went on to become a scholarship winner and an honors college graduate, and climbed the ladder to become a vice president at Goldman Sachs.

This moving, at times heartbreaking, but always inspiring story will show young readers that anything is possible. Julissa's story provides a deep look into the little-understood world of a new generation of undocumented immigrants in the United States today--kids who live next door, sit next to you in class, or may even be one of your best friends.
Julissa Arce is a CNBC and Crooked media contributor, writer, speaker, and social justice advocate. She is the cofounder and chairman of the Ascend Educational Fund, a college scholarship and mentorship program that assists immigrant students, regardless of their immigration status, ethnicity, or national origin. Julissa is also a board member for the National Immigration Law Center and for College Spring. Prior to becoming an advocate, she built a successful career on Wall Street, working at Goldman Sachs and Merrill Lynch.
"One doesn't often think that a harrowing immigration story will end with an undocumented girl becoming a vice president at a U.S. multinational investment bank. And yet, Arce's story paints a picture of an ambitious child willing to do anything to live the American Dream, even in a country that may not initially want her."—The Los Angeles Times

"Someone Like Me is a brave and important story that shows the beautiful resilience of immigrants forging a home in an unfamiliar land. Julissa's honest, assertive voice is both refreshing and inspirational, a gift for young women of color everywhere. This book should be required reading."—p.p1 {margin: 0.0px 0.0px 0.0px 0.0px; font: 13.0px Times}span.s1 {font-kerning: none}Erika L. Sánchez, New York Times Bestselling Author of I Am Not Your Perfect Mexican Daughter

"Brilliant! In a captivating fashion Julissa shows us that when we believe in something with all our heart and prepare for success, opportunity will find us."—p.p1 {margin: 0.0px 0.0px 0.0px 0.0px; font: 13.0px Times}span.s1 {font-kerning: none}Diane Guerrero, actor and author of In the Country We Love: My Family Divided

"Someone Like Me is a beautiful tale of love, perseverance, and survival. Arce gives readers a poignant and heart-wrenching window into the pain and anxiety endured by immigrant families separated by the border in a time when we desperately need it. She's an inspiration to all Americans."—Sara Saedi, author of Americanized: Rebel Without a Green Card

"As a young girl desperate for inspiration, I wish this book had existed when my dreams felt beyond my reach. Young people are lucky they can read Julissa's story and know without a doubt that the impossible is possible."—p.p1 {margin: 0.0px 0.0px 0.0px 0.0px; font: 13.0px Times}span.s1 {font-kerning: none}Reyna Grande, Nationally bestselling author of The Distance Between Us

* "Like today's "DREAMers," Julissa makes her appreciation of her heritage clear, along with her gratitude for all of the advantages in the U.S. Offering young people a clear autobiographical viewpoint of a controversial issue, this is a must for all collections."—Booklist, starred review

"An honest and heartfelt story of survival."—Kirkus Reviews