The World According to Rick (A Rick and Morty Book) (Hardcover) 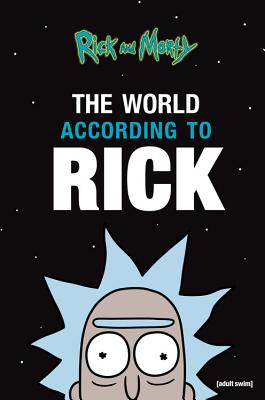 The World According to Rick (A Rick and Morty Book) (Hardcover)

By Rick Sanchez, Matt Carson (As told by)


Not Available
A must-have gift book: the wit, wisdom, and frequent diatribes of mad scientist Rick Sanchez of Adult Swim's Rick and Morty, the Emmy-winning, #1 animated series on TV.

Finally, from the self-appointed "Most Intelligent Being in the Multiverse" Rick Sanchez of Rick and Morty: a mind-bending collection of his innate and acquired wisdom.

Each season, Rick and his grandson Morty embark on thrilling earthly and intergalactic adventures, all for the benefit of science (and Rick's inflated ego). But what makes the depraved genius tick? Now Rick is eager to impart his unique (and sometimes disturbing) take on life, love, and everything in-between for the benefit of aspiring mad scientists everywhere.

Fully illustrated with color images from the show, The World According to Rick is a collection of Rick's most famous (and not so famous) sayings, monologues, and quotes, complete with a personal introduction by the mad man himself. A truly unique and special book, this collectible is sure to become a cult favorite like the show that inspired it.

RICK AND MORTY, ADULT SWIM, the logos, and all related characters and elements are trademarks of and (c) 2018 Cartoon Network.
Rick Sanchez is a sociopathic genius scientist who drags his inherently timid grandson on insanely dangerous adventures across the universe. Rick lives with his daughter Beth's family and constantly brings her, his son-in-law Jerry, granddaughter Summer, and grandson Morty into intergalactic escapades.

Matt Carson lives in Brooklyn with his wife and daughter. He does yoyo tricks and is the author of over 4,000 haikus about famous dead people called Haikubituaries. This is his first book of compiled quotations from a science fiction cartoon show.
"In the golden age of narrative TV, cartoons offer countervailing subversive pleasures: They're juvenile, satiric, surreal. Those words all apply to the wild spree Rick and Morty."—People Weekly

"Funny and edgy... There are shades of Futurama, South Park, and even Beetlejuice in the half-hour show, but at the same time, it has the right amount of edge and wackiness to feel entirely original... Harmon and Roiland take a stock situation of a kid and his lovable granddad and turn it on its head, but not before spinning it around and around. The animation, overseen by art director James McDermott, is fresh, colorful and as wacky as the script."—San Francisco Chronicle

"A blistering, demented animated series... The audaciousness of this inventive series... The wisdom dispensed by Rick may be open to question, but you have to admire the bluntness. Grandparenting at its unhinged finest."—The New York Times

"A wonderfully cynical sci-fi comedy, but its second-season finale affirmed the show's secret humanity... Both innovative and classical in its storytelling... It's about characters who take multi-dimensional leaps and bounds with every episode-but also confronts relatable human truths about the intangible pull of family and loyalty."—The Atlantic