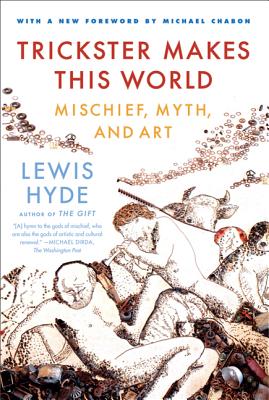 In Trickster Makes This World, Lewis Hyde brings to life the playful and disruptive side of human imagination as it is embodied in trickster mythology. He first visits the old stories—Hermes in Greece, Eshu in West Africa, Krishna in India, Coyote in North America, among others—and then holds them up against the lives and work of more recent creators: Picasso, Duchamp, Ginsberg, John Cage, and Frederick Douglass. Twelve years after its first publication, Trickster Makes This World—authoritative in its scholarship, loose-limbed in its style—has taken its place among the great works of modern cultural criticism.

This new edition includes an introduction by Michael Chabon.

Michael Chabon is the bestselling author of The Amazing Adventures of Kavalier & Clay, Werewolves in Their Youth, The Yiddish Policemen’s Union, Wonder Boys, and The Mysteries of Pittsburgh. Kavalier & Clay won the 2001 Pulitzer Prize. In 2000 Wonder Boys was adapted into a critically acclaimed film starring Michael Douglas. Chabon was born in Washington, D.C., and grew up in Pittsburgh, Pennsylvania and Columbia, Maryland.  He now lives in California with his wife and children.

“[A] hymn to the gods of mischief, who are also the gods of artistic and cultural renewal.” —Michael Dirda, The Washington Post

“Brilliant . . . By the time [Hyde] is done he has folded language culture, and the very habit of being human into his ken.” —The New Yorker

“Hyde is one of our true superstars of nonfiction.” —David Foster Wallace

“[Trickster Makes This World] should be ready by anyone interested in the grand and squalid matter of all things human.” —Margaret Atwood, Los Angeles Times