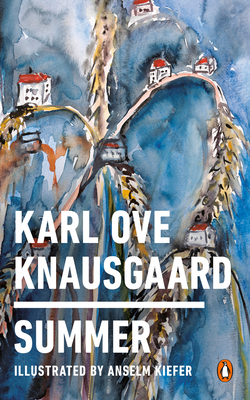 
OUT OF STOCK - Please contact store for expected availability
The grand finale of Karl Ove Knausgaard's masterful and intensely-personal series about the four seasons, illustrated with paintings by the great German artist Anselm Kiefer

The conclusion to one of the most extraordinary and original literary projects in recent years, Summer once again intersperses short vividly descriptive essays with emotionally-raw diary entries addressed directly to Knausgaard's newborn daughter. Writing more expansively and, if it is possible, even more intimately and unguardedly than in the previous three volumes, he mines with new depth his difficult memories of his childhood and fraught relationship with his own father. Documenting his family's life in rural Sweden and reflecting on a characteristically eclectic array of subjects--mosquitoes, barbeques, cynicism, and skin, to name just a few--he braids the various threads of the previous volumes into a moving conclusion. At his most voluminous since My Struggle, his epic sensational series, Knausgaard writes for his daughter, striving to make ready and give meaning to a world at once indifferent and achingly beautiful. In his hands, the overwhelming joys and insoluble pains of family and parenthood come alive with uncommon feeling.
Karl Ove Knausgaard’s first novel, Out of the World, was the first ever debut novel to win the Norwegian Critics’ Prize and his second, A Time for Everything, was widely acclaimed. The My Struggle cycle of novels has been heralded as a masterpiece wherever it has appeared, and the first volume was awarded the prestigious Brage Prize.


Anselm Kiefer (1945) is a German painter and sculptor. He studied with Joseph Beuys and Peter Dreher during the 1970s. His works incorporate materials such as straw, ash, clay, lead, and shellac. The poems of Paul Celan have played a role in developing Kiefer's themes of German history and the horror of the Holocaust, as have the spiritual concepts of Kabbalah.
“He brings it all alive in his prose, makes it shimmer. Whether intellectually parsing for meaning or playing this existential video game of political turmoil, horror, and heartache, his writing flows easily from quiet, thoughtful engagement to ecstatic communion with the world… He may be done with this quartet, the My Struggle series, and autofiction altogether, but I still want more of it. That kind of passionate literary intimacy is rare. And wanting more and even more — isn’t that just like being in love?” — Los Angeles Review of Books

“Knausgaard closes his quartet of autobiographical meditations on the seasons in an appropriately verdant and optimistic fashion. . . While interrogating the nature of storytelling, he’s priming readers for a powerful, straightforward yarn. Breezy reading that’s also a commentary on breezy reading. Some trick.” - Kirkus, starred review