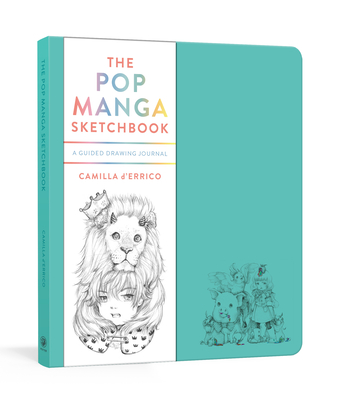 
OUT OF STOCK - Please contact store for expected availability
A stylish sketchbook from acclaimed manga artist and painter Camilla d'Errico, featuring creative drawing prompts and a smattering of her signature cute, creepy, and quirky characters.

The Pop Manga Sketchbook is packed with ideas and inspiration from the instructional expert on manga, anime, and Pop Surrealism, Camilla d'Errico. With a brief introduction from the beloved artist, thirty drawing prompts, and fifty of d'Errico's stunning sketches sprinkled throughout, this guided drawing journal is perfect for artists of all skill levels.

Fans of d'Errico's instructional Pop Manga books and newcomers to manga and drawing will be swept into the artist's uniquely colorful, surreal world in the pages of this sketchbook. A layflat binding provides plenty of room for artists to practice their drawing skills, and the sturdy paper is suitable for pencil, ink, and watercolor. Whether you are a beginner or a devoted fan, you will draw inspiration from The Pop Manga Sketchbook.
Camilla d'Errico has gained wide acclaim for her illustrative work, including nominations for the Joe Shuster Award and the Will Eisner Award. She is the co-author of Pop Manga and the author of Pop Painting, Pop Manga Coloring Book, Pop Manga Mermaids and Other Sea Creatures, and Pop Manga Drawing. She has worked with Dark Horse Comics, Image Comics, Hasbro, Disney, Sanrio, and Neil Gaiman, and created her own cult-sensation properties Tanpopo and Helmetgirls. She is also well known for her melting rainbow, big-eyed girl oil paintings, which have made her a hit in the international Pop Surrealism movement.