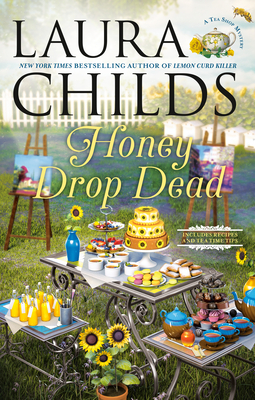 This is book number 26 in the A Tea Shop Mystery series.

The murder of a political bigwig at a Honey Bee Tea sends Theodosia Browning buzzing for answers in this latest installment
of the New York Times bestselling series.

Theodosia’s Honey Bee Tea was an elegant affair set in Charleston’s new Petigru Park amid newly planted native grasses and a community beekeeping project. But when a phony beekeeper shows up and sprays toxic smoke at the guests, the party erupts in chaos. Worse yet, a shot rings out and Osgood Claxton III, candidate for state legislature, falls to the ground—dead.

Holly Burns, the gallery owner who asked Theodosia to cater the tea, is understandably heartbroken. A man is dead, her guests are angry and injured, and the paintings that were on display are left in tatters. When the police don’t seem to have a clue, when old-line politicos don’t want questions asked, Holly begs Theodosia to run a shadow investigation and help restore her gallery’s good name.

Between hosting a Wind in the Willows Tea and a Glam Girl Tea, Theodosia questions everyone that had a bone to pick with Claxton. This includes Booker, an angry outsider artist; Lamar Lucket, Claxton’s political opponent; and Mignon Merriweather, the dead man’s soon-to-be ex-wife. But the investigation becomes a political hot potato following a second murder, the revelation of a messy affair, a chase through a swamp, and a vandalized shop.

INCLUDES DELICIOUS RECIPES AND TEA TIME TIPS!
Laura Childs is the New York Times bestselling author of the Tea Shop Mysteries, New Orleans Scrapbooking Mysteries, and Cackleberry Club Mysteries. In her previous life she was CEO of her own marketing firm, authored several screenplays, and produced a reality TV show.