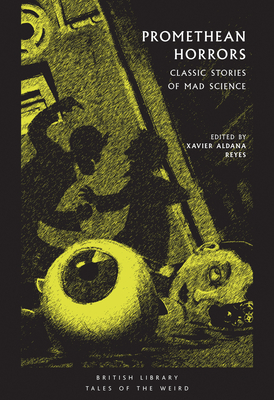 From the imaginations of Gothic short-story writers such as Edgar Allan Poe, Nathaniel Hawthorne, Mary Shelley, and later weirdists such as H.P. Lovecraft came one of the most complex of villains—the mad scientist.

Promethean Horrors presents some of the greatest mad scientists ever created, as each cautionary tale explores the consequences of pushing nature too far.

These savants take many forms: there are malcontents who strive to create poisonous humans; technologists obsessed with genetic splicing; mesmerists interested in the way consciousness operates after death, and inventors who believe in a hidden reality.

From essential Gothic stories by Mary Shelley, E. T. A. Hoffmann and Edgar Allan Poe to later forays into the weird and psychedelic by E. Nesbit, H. P. Lovecraft and George Langelaan, the classic figure of the mad scientist is reanimated in these pages along with every untethered ambition and its calamitous consequences.
Xavier Aldana Reyes is Reader in English Literature and Film at Manchester Metropolitan University, and a founding member of the Manchester Centre for Gothic Studies. His books include Spanish Gothic, Horror: A Literary History, Horror Film and Affect, Digital Horror, and Body Gothic. Xavier is chief editor of the University of Wales Press's Horror Studies series.