The Dog Is Not a Toy (Get Fuzzy Collection) (Paperback) 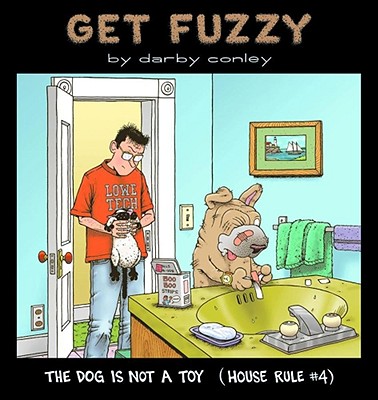 The Dog Is Not a Toy (Get Fuzzy Collection) (Paperback)

Get Fuzzy makes the fur fly. This freshly amusing strip is a darling among readers who enjoy pets with an attitude. This wry cartoon features Rob Wilco, a mild-mannered ad guy who's guardian to two rambunctious pets: Bucky, a temperamental cat who carries a boom box and goes on spending sprees, and Satchel, a gentle canine who tries to remain neutral even when he bears the brunt of Bucky's mischief. Together, this unlikely trio hangs out together, watching TV, cooking for friends, and attempting the occasional adventure outside. Anyone who has a pet or even knows one will find this Get Fuzzy collection, The Dog is Not a Toy, an astutely witty take on relationships between the species.


Darby Conley is an illustrator and former elementary school teacher who was born in Concord, Mass., but spent most of his childhood in Knoxville, Tenn. He attended Amherst College and currently lives in Massachusetts with his cat. He first sketched the characters Bucky, Satchel, and Rob in 1996, and the strip was syndicated in 1999.