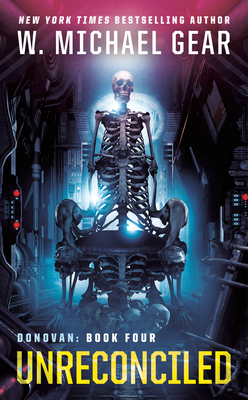 This is book number 4 in the Donovan series.

Now in paperback, the fourth book in the thrilling Donovan sci-fi series returns to a treacherous alien planet where corporate threats and dangerous creatures imperil the lives of the colonists.

Where does one put a messianic cult of practicing cannibals? That becomes the question when Ashanti appears in Donovan's skies. She was designed for no more than four years in space. It's taken ten. The crew has sealed the transportees onto a single deck--and over the years, the few survivors down there have become monsters. Led by the messiah, Batuhan, they call themselves the Unreconciled.

Supervisor Kalico Aguila settles them at remote Tyson Station. With the discovery of a wasting disease among the Unreconciled, it's up to Kalico, Dya Simonov, and Mark Talbot to try and deal with the epidemic. Only Batuhan has plans of his own--and Kalico and her people are to be the main course.

Talina Perez has brokered an uneasy truce with the quetzal molecules that float in her blood. Now, she, young Kylee Simonov, a quetzal named Flute, and a clueless nobleman named Taglioni rush to save Kalico's vanished party.

But as always, Donovan is playing its own deadly game. Lurking in the forest outside Tyson Base is an old and previously unknown terror that even quetzals fear. And it has already begun to hunt.
W. Michael Gear is a New York Times and international  bestselling author with 17 million copies of his books in print. Married to bestselling author Kathleen O'Neal Gear, he holds a master's degree in anthropology, has authored more than 50 novels, and has been translated into 29 languages. He has worked as a forensic anthropologist, was principal investigator in his own archaeological firm, and raised bison for 29 years. He was twice awarded Producer of the Year by the National Bison Association. His hobbies include shooting large-caliber rifles and long-distance touring on his Moto Guzzi named Sheela. Gear lives in Wyoming.
Praise for the Donovan novels:

“What a ride! Excitement, adventure, and intrigue, all told in W. Michael Gear's vivid, compulsively readable prose. A terrific new science-fiction series; Gear hits a home run right out of the park and all the way to Capella.” —Robert J. Sawyer, Hugo Award-winning author of Quantum Night

“A marginal colony on a living world—where human life and human will are tested to the limits. An intriguing and inventive new work from Michael Gear, first of a trilogy. Recommended!” —C. J. Cherryh, Hugo Award-winning author of Downbelow Station

“Gear kicks off a new sf series by weaving a number of compelling characters into the narrative, including bold heroine Talina Perez and Donovan itself, a planet teeming with danger and delights in turn.... Fans of epic space opera, like Rachel Bach’s Fortune’s Pawn (2013), will happily lose themselves in Donovan’s orbit.” —Booklist

“Dark and gritty, this book shows both the best and worst sides of humanity, all while being emotional and thought-provoking.” —It Starts at Midnight

“It's not easy to create an entire new planet setting and to immediately ground the reader in that world, but Gear makes it look easy.... He strikes an impressive balance between only telling us what we need to know when we need to know it and making this feel like a fully-realized place from the get-go.” —Den of Geek

“The novel's prose is as razor-sharp as Donovan's toothy beasts, its characters deftly defined. The enveloping narrative gallops along at a fierce pace and will make Outpost one of the must-read sci-fi releases of 2018 when it arrives on February 20 from DAW Books.” —SyFy Wire

“A thrilling tale of high-stakes survival on an alien planet.” —Dread Central