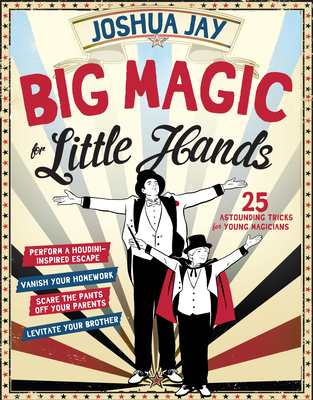 Secrets from the Master Magician, just for kids

Conjure an egg. Vanish a teacup. Teleport a glass of juice. Dazzle your family and friends with 25 astonishing illusions specially designed to require little prep time and dexterity, yet guaranteed to deliver big applause and big fun—including impromptu effects that can be performed anywhere, anytime!

Master teacher and performer Joshua Jay guides his apprentices through every step of the magician’s arts, from the first step—taking the secret Magician’s Oath—all the way to the big finish!

A note to parents: There’s real power in magic. Your child won’t just be reading, practicing, and interacting with adults and peers—he or she will learn public speaking skills and attain real confidence. And your dinner parties will have a headlining magician, free of charge!

Joshua Jay has performed on stages in more than 100 countries. He is a headliner at Hollywood's Magic Castle and a former World Champion in Sleight-of-Hand. He is the author of MAGIC: The Complete Course and, for children, Big Magic for Little Hands. He consulted on illusions for Game of Thrones and helped the US Postal Service with their "Art of Magic" postage stamps. Joshua has performed on The Tonight Show with Jimmy Fallon,The Late Show with James Corden, and he fooled Penn & Teller on their hit show, Fool Us, and he starred in his own off-Broadway magic show, Six Impossible Things.