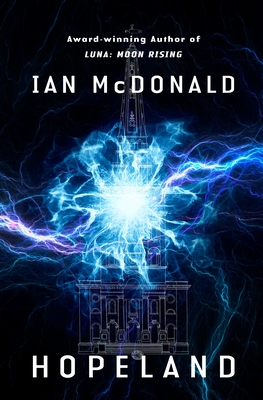 A time-traveling, futuristic saga of a family trying to outlast and remake a universe with a power unlike any we've seen before.

From rioting London to geothermal Iceland to the climate-struck islands of Polynesia, from birth to life to death, from tranquillity to terror to joy, Raisa’s journey will encompass the world. But one thing will always be true.

Hopeland is family—and family is dangerous.

IAN MCDONALD was born in 1960 in Manchester, England, to an Irish mother and a Scottish father. He moved with his family to Northern Ireland in 1965. He has won the Locus Award, the British Science Fiction Association Award, and the John W. Campbell Memorial Award. His novels include King of Morning, Queen of Day (winner of the Philip K. Dick Award), River of Gods, The Dervish House, the graphic novel Kling Klang Klatch, and many more. In 2019, Ian was named a Grand Master of Science Fiction by the European Science Fiction Society. He now lives in Belfast.

Praise for Ian McDonald and the Luna series
Ian McDonald is one of the very best science fiction writers in the world. His novels are fearless, brilliant, wise-they illuminate and entertain spectacularly. —Kim Stanley Robinson, New York Times bestselling author

"Spare, simple, elegant when he needs to be...deep and meaty when he wants to be... [Mcdonald] does his work like an artisan pulling a sculpture from stone. " —NPR on Luna: Wolf Moon

"Each of McDonald’s viewpoint characters is made human in fascinating and occasionally disturbing detail, and the solar system of the 22nd century is wonderfully delineated." —Publishers Weekly, starred review on Luna: Wolf Moon

"The fights and vengeance that follow are more vicious and intricate than anything in Game of Thrones, full of great acts of self-sacrifice and viciousness alike, brave cavalry charges and last stands, cowardice and avarice." —Boing Boing on Luna: Wolf Moon