Breaking Barriers: How P-Tech Schools Create a Pathway from High School to College to Career (Hardcover) 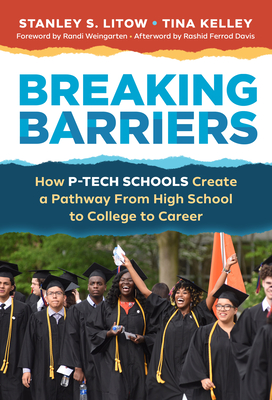 Breaking Barriers: How P-Tech Schools Create a Pathway from High School to College to Career (Hardcover)

Breaking Barriers shows how to redesign high schools so that all students can move on to college and successful careers. In a negation of the American Dream, a child's zip code is currently a far better predictor of success than hard work, intelligence, or resilience. This book tells the story of a school model that focuses on equity and works to prove that all young people can achieve academic excellence given the right support. P-TECH (Pathways in Technology Early College High School) combines public high schools and community colleges in partnership with employers, providing both opportunity and support for all students. This innovative and effective approach eliminates barriers to replication by engaging all stakeholders. The first P-TECH, which opened in a low-income Brooklyn neighborhood, is now a model for school reform. Praised by President Obama and heads of nations, its story is told through the voices of students who have shattered the myths about which students can succeed.

Stanley S. Litow is visiting professor of the practice in the Sanford School of Public Policy at Duke University, a trustee of the State University of New York, president emeritus of the IBM Foundation, and a former deputy chancellor of schools for New York City. Tina Kelley is coauthor of the bestseller Almost Home: Helping Kids Move from Homelessness to Hope and a former New York Times reporter.