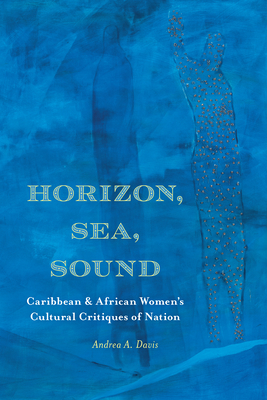 By Andrea A. Davis

In Horizon, Sea, Sound: Caribbean and African Women’s Cultural Critiques of Nation, Andrea Davis imagines new reciprocal relationships beyond the competitive forms of belonging suggested by the nation-state. The book employs the tropes of horizon, sea, and sound as a critique of nation-state discourses and formations, including multicultural citizenship, racial capitalism, settler colonialism, and the hierarchical nuclear family.

Drawing on Tina Campt’s discussion of Black feminist futurity, Davis offers the concept future now, which is both central to Black freedom and a joint social justice project that rejects existing structures of white supremacy. Calling for new affiliations of community among Black, Indigenous, and other racialized women, and offering new reflections on the relationship between the Caribbean and Canada, she articulates a diaspora poetics that privileges our shared humanity. In advancing these claims, Davis turns to the expressive cultures (novels, poetry, theater, and music) of Caribbean and African women artists in Canada, including work by Dionne Brand, M. NourbeSe Philip, Esi Edugyan, Ramabai Espinet, Nalo Hopkinson, Amai Kuda, and Djanet Sears. Davis considers the ways in which the diasporic characters these artists create redraw the boundaries of their horizons, invoke the fluid histories of the Caribbean Sea to overcome the brutalization of plantation histories, use sound to enter and reenter archives, and shapeshift to survive in the face of conquest. The book will interest readers of literary and cultural studies, critical race theories, and Black diasporic studies.

ANDREA A. DAVIS is an associate professor in the Department of Humanities at York University, Toronto and coeditor of The Journal of Canadian Studies. A former director of the Centre for Research on Latin America and the Caribbean, she is also the editor of Jamaica in the Canadian Experience: A Multiculturalizing Presence.
“Horizon, Sea, Sound performs ‘the hard work of thinking and caring Blackness.’ It illuminates livable futures in the hurt and raw of the now, and it demonstrates the continuing importance of forging respectful and generative relations among oppressed peoples. In rigorous and heart-quickening analyses of diverse art forms throughout the Americas, Andrea A. Davis enacts the borderless transformational power of Black women’s art, thought, and social struggle.” —David Chariandy, author of Brother

“Horizon, Sea, Sound: Caribbean and African Women’s Cultural Critiques of Nation is an indispensable, trenchant discourse on nation, gender, and Blackness. Literary scholar Andrea Davis ‘set(s) out trying to do some of the hard work of thinking and caring Blackness’ and in doing so she gets at the interstices of these ragged and troubled terms and clears out a place for thinking and living. Reading works by Erna Brodber, Dionne Brand, M. NourbeSe Phillip, Grace Nichols, Canisia Lubrin, Sylvia Wynter, Tina Campt, and more, Horizon, Sea, Sound thinks questions of affiliation outside of hierarchy and charts coexistence and resistance across space and geohistories. With this elegant and profoundly important work, Davis deepens the world-breaking of Black scholarship that is so vital for our futures.” —Christina Sharpe, author of In the Wake: On Blackness and Being

“In Horizon, Sea, Sound: Caribbean and African Women’s Cultural Critiques of a Nation, York University professor Andrea A. Davis invites us to consider the works of a dozen Black women artists, among them, playwright Djanet Sears, poet M. NourbeSe Philip, and singer-songwriter Amai Kuda. These artists face the trauma of the past, while insisting upon Black women’s survival and powerful advocacy. In sharing their creative reimagining of the tropes of the horizon, sea, and sound, Davis offers new visions for Canada rooted in Black women’s belonging in and beyond the nation . . . Davis’ conviction that Black women’s pain matters, because Black women’s lives matter, is an invitation to readers to engage more deeply with Black women’s voices. When we listen, we hear pain and anger at injustice. But we also hear the sounding out of joyful futures by and for Black women who are not only imagining tomorrow but asserting their vibrant, creative powers in the arts today.” —Elaine Coburn, Canadian Notes and Queries