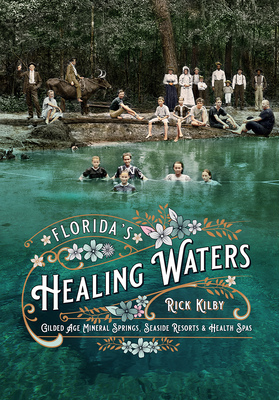 A colorful look at a forgotten era of Florida tourism

Filled with rare photographs, vintage postcards and advertisements, and fascinating descriptions from over 100 years ago, Florida's Healing Waters spotlights a little-known time in Florida history when tourists poured into the state in search of good health.

Rick Kilby explores the Victorian belief that water caused healing and rehabilitation, tracing the history of "taking the waters" from its origins in the era of Enlightenment. Nineteenth-century Americans traveled from afar to bathe in the outdoors and soak up the warm climate of Florida. Here, with more than 1,000 freshwater springs, 1,300 miles of coastline, and 30,000 lakes, water was an abundant resource.

Through the wealth of images in this book, Kilby shows how Florida's natural wonders were promoted and developed as restorative destinations for America's emerging upper class. The rapid growth in tourism infrastructure that began during the Gilded Age lasted well into the twentieth century, and Kilby explains how these now-lost resorts helped boost the economy of modern Florida.

Today, these splendid health spas and elaborate bathing facilities have been lost, replaced by recreational amenities for a culture more about sun and fun than physical renewal. In this book, Kilby emphasizes the value of honoring and preserving the natural features of the state in the face of continual development. He reminds us that Florida's water is still a life-giving treasure.