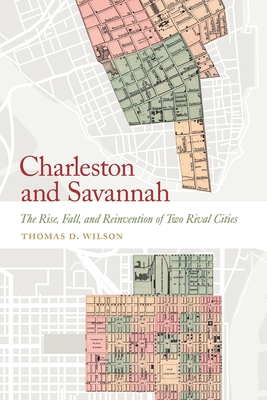 Thomas D. Wilson's Charleston and Savannah is the first comprehensive history of Charleston and Savannah in a single volume that weaves together the influences and parallels of their intrinsic stories. As two of the earliest English-speaking cities founded in America, Charleston and Savannah are among the nation's top historic sites. Their historic characters, which attract millions of visitors each year, are each a rich blend of cultural, environmental, and socioeconomic elements. Yet even with this popularity, both cities now face a challenge in preserving their authentic historic character, natural beauty, and environmental quality. Wilson charts the ebb and flow of the progress and development of the cities using various through lines running within each chapter, constructing an overall character assessment of each.

Wilson charts the economic rise of these port cities, beginning with their British foundations and transatlantic trade in the colonies through to their twentieth-century economic declines and resurgences. He examines the cultural and economic aspects of their Lowcountry landscapes and their evolution as progress and industrialization made their mark. Employing both quantitative and qualitative methodologies in his comparisons of the two cities, he considers their histories, natural landscapes, weather patterns, economies, demographics, culture, architecture, city planning, and infrastructure. While each has its own civic and cultural strengths and weaknesses, both are positioned as historically significant southern cities, even as they assess aspects of their problematic pasts.
THOMAS D. WILSON is a planner, author, and independent scholar who lives near Nashville, Tennessee. He is the author of The Oglethorpe Plan: Enlightenment Design in Savannah and Beyond and The Ashley Cooper Plan: The Founding of Carolina and the Origins of Southern Political Culture.