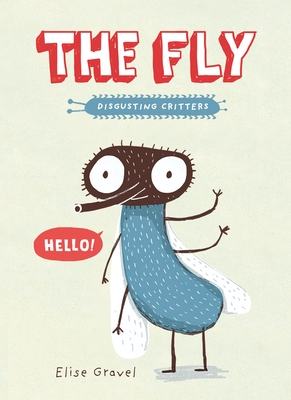 The first in a series of humorous books about disgusting creatures, The Fly is a look at the common housefly. It covers such topics as the hair on the fly's body (requires a lot of shaving), its ability to walk on the ceiling (it's pretty cool, but it's hard to play soccer up there), and its really disgusting food tastes (garbage juice soup followed by dirty diaper with rotten tomato sauce, for example). Although silly and off-the-wall, The Fly contains factual information that will both amuse and teach at the same time.
ELISE GRAVEL is an award-winning author/illustrator from Quebec. She has won a Governor General's Award for Children's Illustration in French, and is well-known for her original, wacky picture books and graphic novels. After completing her studies in graphic design, Elise found herself quickly swept up into the glamorous world of illustration. Her old design habits drive her to work a little text here and there into her drawings and she loves to handle the design of her assignments from start to finish. She is inspired by social causes and likes projects that can handle a good dose of eccentricity. The author lives in Montreal, Quebec.
Praise for previous Disgusting Critters:

"Each page has incredible visual appeal and is very eye-catching.... Gravel's ability to turn the most disgusting fact into an adorable drawing is remarkable.... This series is a must-read for children who like the world's most unlikeable creatures. Highly Recommended." - CM Magazine

"Fact-filled enough to satisfy those interested in flies, yet with enough charm to grab those who aren't. This is a great entry into a series kids will likely latch onto." - School Library Journal