Madame Alexander: The Creator of the Iconic American Doll (Hardcover) 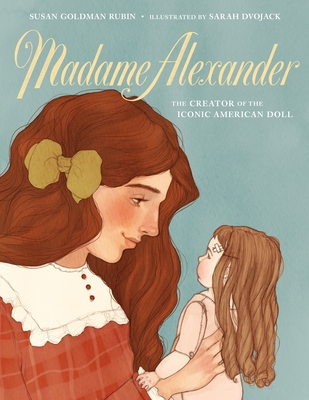 Madame Alexander: The Creator of the Iconic American Doll (Hardcover)


Unavailable
Not Yet Published

An inspiring, uplifting picture book biography about iconic doll creator, Madame Alexander, whose love for dolls and bringing joy to others began at a young age and only continued to grow.

Someday, she thought, I will make dolls that don’t break so children will never be unhappy.

Beatrice Alexander’s family ran a doll hospital in their home in New York’s Lower East Side, where she grew to love fixing and making dolls. Beatrice dreamed of becoming an artist, but her family couldn’t afford to send her to sculpting school. She never stopped dreaming, even as she stayed home, graduated from high school, and got married. When World War I broke out, she came up with the idea to make unbreakable, cloth dolls modeled after nurses to support the war effort and help keep children happy. After the war, Beatrice founded Madame Alexander and redefined the doll industry, creating some of the first plastic and collectible dolls, dolls that never break.

Susan Goldman Rubin grew up in the Bronx and dreamed of becoming an artist. She attended the High School of Music & Art in New York, then Oberlin College in Ohio. As a young woman she illustrated her own stories, then turned to writing nonfiction for all ages. She is the author of many highly praised biographies for young readers including Degas, Painter of Ballerinas, and Mary Seacole Bound for the Battlefield. Rubin lives in Malibu, California.

Sarah Dvojack grew up in Washington State, where she developed a passion for all things history, circus, and Irish dance. She graduated from Seattle’s Cornish College of the Arts with a degree in Graphic Design and went on to study in the School of Visual Arts' MFA Illustration as Visual Essay program. She currently works as a book designer and lives in New York. She is the author-illustrator of Rosie the Riveter and the illustrator of Madame Alexander: The Creator of the Iconic American Doll.