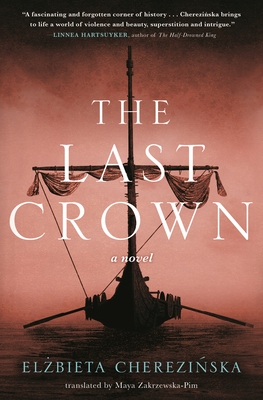 This is book number 2 in the The Bold series.

Across Baltic shores, English battlegrounds, and the land of Northern Lights, The Last Crown is the follow up to The Widow Queen, and the epic conclusion of Swietoslawa's journey from Polish princess to Queen of Denmark & Sweden and Queen Mother of England.

The web of love and lies is thicker than ever as we reunite with players spread across the board of Europe in this sequel to The Widow Queen. Our heroes and enemies alike are beholden to the hands of fate.

While Olav Tryggvason reclaims the throne of Norway and baptizes the land by blood, King Sven in Denmark is filled with rage at his once comrade. Not only does Olav threaten Sven’s hold on Norway, but his hold on his own wife -- the woman with two crowns, three sons, and a heart long spoken for. Swietoslawa, the Bold One.

Meanwhile, those Swietoslawa trusts most -- Astrid, her sister, Sigvald, her brother-in-law and head of the Jomsvikings, and even her own son, Olaf -- take shocking, selfish action, with consequences that will reverberate for years to come.

For the storm of unrequited love destroys all in its path.

Elzbieta Cherezinska is the #1 bestselling and award-winning author of more than a dozen novels. She was born in Pila, a small town in the west of Poland, and currently resides on the Baltic coast in Kolobrzeg, Poland. The Widow Queen is her first novel to be translated into English.

Maya Zakrzewska-Pim grew up in Warsaw, Poland. She studied English at Trinity College Dublin and is working on a PhD from Cambridge. Her previous Polish to English translations include Ignacy Karpowicz’s Gestures and Sonka.

Priase for The Widow Queen:

"The Widow Queen is the story of a woman standing strong in a world run by men, and of the sacrifices we must make for power and love. Elzbieta Cherezinska brings epic history to life with her own unique and recognizable voice. Her stories have emotion, drama, and make even the most well-known historical events feel exciting and fresh."—Tomek Baginski, Executive Producer, The Witcher, Netflix

“A fascinating and forgotten corner of history . . . Cherezinska brings to life a world of violence and beauty, superstition and intrigue.”—Linnea Hartsuyker, author of The Half-Drowned King

“Fascinating, authentic, and beautifully told, The Widow Queen is the story of a forgotten Polish princess in an era of warriors, the headstrong, clever Swietoslawa—twice a queen, mother of kings. An impressive and compelling story brought vividly to life!”—Susan Fraser King, author of Lady Macbeth and Queen Hereafter

"THE WIDOW QUEEN is a genuine gift for historical fiction enthusiasts: a deeply-detailed story of power, politics, and love—and the impossibility of keeping all three. In Swietoslawa, Elzbieta Cherezinska reveals to us a complex woman who was ignored by historians, rightfully elevating her to an equal standing with her more-famous allies and enemies. This carefully-crafted novel lives up to its protagonist’s title: the Bold One."—Nathan Makaryk, author of Nottingham

“Look no further for your next great adventure. The Widow Queen unspools the true history of two courageous siblings, Boleslaw—the first and future King of Poland, and his daring sister Swietoslawa, fated to a royal destiny in a great Norse kingdom. Ranging across Baltic shores to the northern reaches of Scandinavia, and far West to King Ethelred's England, Cherezinska propels us through a tale of great personal and social transformation, from pagan to Christian, and private to political. This hidden history of a forgotten yet vitally important heroine brings Swietoslawa into the limelight she so richly deserves.”—Octavia Randolph, author of The Circle of Ceridwen Saga