For Which We Stand: How Our Government Works and Why It Matters (Hardcover) 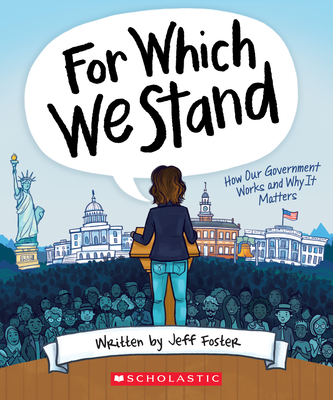 For Which We Stand: How Our Government Works and Why It Matters (Hardcover)


OUT OF STOCK - Please contact store for expected availability
Discover everything you ever wanted to know about how the government really works with this accessible, highly designed and illustrated handbook from Marjory Stoneman Douglas AP government teacher Jeff Foster.Now more than ever, it's so important for everyone to understand our government: where it came from, how it works, and how we can bring about change. And, after all, in the words of author and government teacher Jeff Foster, "If you don't participate, you can't complain."This book is a comprehensive and entertaining guide that answers questions like: What is the Constitution? What are the branches of the government? What is the Electoral College? What are the political parties? What are the different responsibilities of the city, state, and federal governments?Plus, discover the complete backstory on some of our government's most important moments, like why we wrote the Declaration of Independence, and how people since then have worked withand protested againstthe government to improve the lives of all Americans.Each spread features a mix of black-and-white and full-color art, including infographics, charts, maps, political caricatures, and other engaging visual elements that will be fun and easy for kids to understand.Includes a foreword from Yolanda Renee King, an activist and the granddaughter of Martin Luther King, Jr. and Coretta Scott King, plus lots of amazing back matter about how kids can participate and get involved.
Julie McLaughlin is a freelance illustrator whose work includes commissions for editorial, advertising, and publishing clients from around the world. Her previous books have been nominated for several awards, including the Norma Fleck Award for Canadian Children’s Non-Fiction, which she won for Why We Live Where We Live by Kira Vermond in 2015. Julie grew up on the prairies and now resides in Victoria, BC.

Yolanda Renee King never met her grandfather, Dr. Martin Luther King Jr. But the 13 year old is one of the countless activists inspired by his actions.

As a young activist devoted to fighting racial injustice and gun violence in schools, that’s a dream that fuels her further.

Jeff Foster is an Advanced Placement Government and Politics teacher at Marjory Stoneman Douglas High School in Parkland, Florida. His motto to his students has always been: “You can’t complain about government if you don’t participate.” After the tragedy that occurred at his school in February 2018, many students credited “Mr. Foster” with giving them the tools that inspired the Never Again movement and spawned the March for Our Lives. Jeff continues to motivate and inspire his students to become active participants in government. He believes that one person can make a difference, no matter their age. He lives in Boynton Beach, Florida with his wife Loren and two daughters, Lilly and Luciana.

Praise for For Which We Stand:

"Reading this book is like taking a civics class from a fantastic teacher." -The New York Times

"An essential guide to the U.S. government for upper-elementary and middle school students. . . Recommended for all collections." -School Library Journal

Praise for For Which We Stand:

"Reading this book is like taking a civics class from a fantastic teacher." -The New York Times

"An essential guide to the U.S. government for upper-elementary and middle school students. . . Recommended for all collections." -School Library Journal