Memories of the Islands: The Life, Place, and Times of the Barber Family (Paperback) 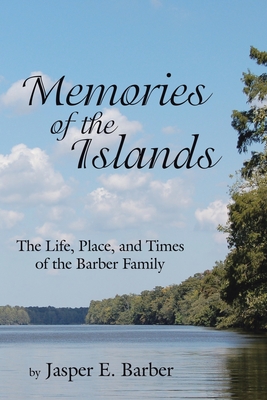 Memories of the Islands: The Life, Place, and Times of the Barber Family (Paperback)

Through stories and anecdotes, Jay Barber takes the reader into the world he once knew, a world the present generation can hardly believe existed only a few decades ago.

Barber left that world at the age of 18 seeking to find a better one, but the memories of his youth and that place stuck to him like the waterline on the trees in the Islands swamps.

He shares his childhood in Memories of the Islands while recording a history of the Barber family in Martin County, North Carolina, and their struggles to survive the Great Depression, the flood of 1940, and a number of family tragedies.

Looking back, he realizes that his two worlds were connected like the swamps and the islands where he grew up.

Factual and honest about the times and events, Memories of the Islands will pull at your heart strings and make you laugh, and it will jog the memory of the older generation about a time that was.

Memories of the Islands is a book for all ages and for all times.

Jasper (Jay) E. Barber was the 21st child born to William Frank Barber and the fifth born to Icelene Davenport Barber. He was born November 9, 1938, in Williamston, North Carolina, the same day Adolf Hitler and his Nazi Party began their attack on Jews. Barber's only memory of World War II was the funeral he attended of a soldier who fought in the war. He attended school in Jamesville, North Carolina, from 1945 to 1956 when he quit the eleventh grade. He enlisted in the United States Air Force the following month. Barber remained in the Air Force until October 1, 1980, retiring with 24 years of service as a senior master sergeant. During his Air Force career he edited newspapers, wrote news and feature stories, worked in public relations for Recruiting Service, and served as an historian. He attended Martin Community College in Williamston, North Carolina, from 1981 to 1982, and East Carolina University in nearby Greenville from 1982 to 1984. He graduated Magna Cum Laude in May, 1984, with a Bachelor of Science Degree in English, the only child of Frank Barber to graduate from college. In August 1984 he accepted a job with the public affairs office at Seymour Johnson Air Force Base in Goldsboro, North Carolina. He later became deputy chief of the 4th Fighter Wing Public Affairs Office and served in that position until retiring a second time on March 1, 2001. Since his retirment he has been researching his family history and writing Memories of the Islands, his first book, the publication of which fulfills a lifetime dream. He is married to Mary Jane Rogers of Brewer, Maine. They have two sons: Dean and Larry; a granddaughter, Kelly, and a grandson, Chad. They reside in Goldsboro.