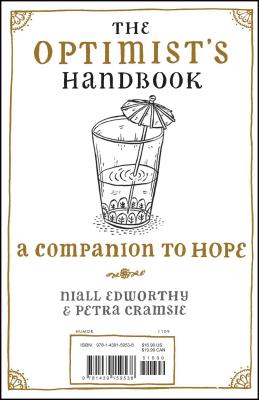 Humanity's story is one long testimony to the truth that life is as rewarding and beautiful as you make it. As pioneers, inventors, and dreamers have always known, you can do anything if only you persevere. Ever since we hauled ourselves out of the swamp, our history has been one of extraordinary cultural and technological progress, of mind-boggling discoveries and remarkable achievements, often against the odds. It's no coincidence that you see no statues of pessimists in city squares.

Still, cynical and doubting voices are heard all too loudly and frequently in public discourse. A potent antidote to their gloom and doom, The Optimist's Handbook is a joyful explosion of wit and wisdom from our past and present that celebrates the art of greeting life with the excitement it deserves. This handbook will inspire, enchant, and entertain you as you go forward into all your wonderful tomorrows. Even if, after reading it, you are not moved to feats of glory for the greater good, the fact is that optimists are healthier, happier, and richer than their gloomy counterparts. Hear that, killjoys?

The world is a grindstone and life is your nose.
Fred Allen, 1894-1956, American humorist

Why beat around the bush? The truth is that life is a never-ending cycle of toil and pain with nothing but death to reward all our suffering. Furthermore, what solace is there in blind optimism or fanciful daydreaming when it is perfectly clear that the world is heading toward a complete meltdown whether we live in it or not? Resigning yourself to life's grim treadmill, and thereby avoiding more disappointments, is the best way to trudge forward.

The Pessimist's Handbook is an indispensable companion on your journey through this vale of tears. A clear-sighted, realistic look at life's obstacles, this guidebook is stocked with the pearls of wisdom you need to counter the irritating voices of those who trumpet futile positivity and inane confidence in a brighter future. Feel reassured that scores of people share your sense of impending doom...and have done so for centuries. After all, misery loves company, but not when it's a horde of perky utopians.
Niall Edworthy is an author and journalist. He is the author of The Curious Gardender’s Almanac and over a dozen other books under a variety of guises and noms de plume, covering military history, biography, sport, general humor, and gardening. He lives in West Sussex with his wife and two children.

The following are the author's biographical blurbs as they appear in The Optimist's/Pessimist's Handbook:

The Optimist's Handbook:
Niall Edworthy is the celebrated author of twenty books, making him a hero to many around the globe. Commentators say it is just a matter of time before he sweeps the board of literary awards, turns down a seat in the House of Lords and retires from his estate in the Home Counties to a tropical island, a robust, over-sexed, eight-figure-millionaire philanthropist.

The Pessimist's Handbook:
Over the past decade Niall Edworthy has made a poor to modest living as a jobbing hack. An ongoing disappointment to his dysfunctional family and both his friends, Niall spends his days in a cold garage in the middle of nowhere typing nonsense into an old computer with the one finger not yet afflicted by RSI. His magnum opus, Life Is a Bowl of Toenail Clippings, remains unfinished.

Petra Cramsie worked as an editor for puzzle magazines, then as a writer/researcher for a production company making television documentaries, and then as an editor at Allison and Busby. After leaving London, she studied for degrees in human ecology and philosophy. She lives in Herefordshire with her family.

The following are the author's biographical blurbs as they appear in The Optimist's/Pessimist's Handbook:

The Optimist's Handbook:
In her dazzling early career launching exhibitions, publishing magazines, editing books and writing for television, Petra Cramsie added considerably to the gaiety of nations. She now lives in a rural idyll above Herefordshire’s Golden Valley, secure in the knowledge that tomorrow will be even better than today. Blessed with children, Petra often reminds those citizens of a brighter future that a day without a smile is like a day without sunshine.

The Pessimist's Handbook:
After years spent toiling at various unrewarding employments, Petra Cramsie left London to face the vicissitudes of middle age. She and her dependants live in a godforsaken, wind-tormented spot opposite the Black Mountains. When she is not up to her eyeballs in relentless domestic drudgery, she spends her time contemplating the exact size, shape and texture of the hand-basket in which the world is going to hell.