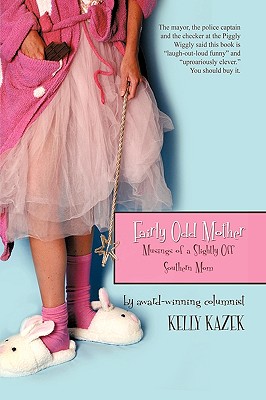 
OUT OF STOCK - Please contact store for expected availability
NON-RETURNABLE Book
"Fairly Odd Mother: Musings of a Slightly Off Southern Mom" is award-winning journalist Kelly Kazek's skewed and hilarious view of various aspects of life, from raising a daughter as a single mom to life in a small town to popular culture ...

"I felt I had a lot of wisdom to impart to my daughter, like "Never let a man see you put on control top panty hose (or for that matter, take them off. Someone could get hurt.)"
- from the column "Moms get dumber as teens age"

"The idea of drinking a bovine pee cola gives a whole new meaning to those old Peter Frampton lyrics, 'I'm in you, urine me.' At least I think that's how they went. Plus, it makes you give those Red Bull ingredients a second glance."
- from the column "Try an ice cold Cow-ca Cola"

"Guys, at this point have likely picked up on the more obvious (to guys) mystery in this whole incident:
Where does a naked woman put $40,000 in jewelry...?
(Pause while we all ponder this.)
...and if this man was paying $100 per hour to have a naked woman in his house, why wasn't he watching her? I imagine to some, this would seem wasteful."
- from the column "Nude maid strips man of self respect"

What readers are saying ...

"Kelly Kazek has a most delightful writing style and a wry sense of humor " - Jim G., Phoenix, Arizona
"I've never written to a newspaper colunist before but I had to write to tell you how much I enjoyed your column. Rarely does anything make me laugh out loud but your column did " - Martha C. Leeds, Alabama
"I burst out laughing several times" - Linda S. Whiting, New Jersey
"If a new column's not there by Monday, I start to get the shakes." - Michael P., Milledgeville, Ga.

Kelly Kazek is managing editor of a community newspaper in Athens, Alabama, where she has encountered a cow with a strategically placed fifth leg, a man claiming to be Elvis' illegitimate son and witnesses to UFOs. Her column has been syndicated to newspapers across the country. She has won more than 100 state and national press awards. She lives in northern Alabama with her daughter Shannon, whom she continues to annoy by writing about her.