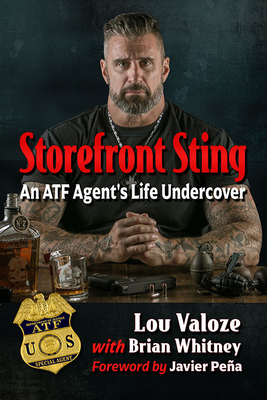 This thrilling story memorializes one of the most dangerous--and successful--series of undercover operations conducted by the Bureau of Alcohol, Tobacco, Firearms and Explosives. Written by the special agent who took these operations from disrupting small time fencing schemes to infiltrating major criminal organizations, this book is the first story of these secretive operations. During the operation's run from 2006 to 2014, Lou Valoze's fictitious businesses allowed his team of undercover agents to take thousands of weapons out of circulation and millions of dollars of drugs off the street. Through these covert storefront operations, the author developed a unique investigative blueprint for removing guns from the hands of violent felons and drug dealers. This book also explores the dark reality of living a double life and how it becomes difficult to tell the difference between the good guys and bad guys.
Lou Valoze, a retired federal agent who currently serves as an instructor for law enforcement officers, spent the last two decades of his career working in an undercover capacity for high profile, complex investigations of home invasion crews, outlaw motorcycle organizations, organized crime groups and murder-for-hire schemes. He lives in Savannah, Georgia. Brian Whitney has been a prisoner advocate, a landscaper, and a homeless outreach worker. He has written or co-authored books and articles in numerous mass market publications, as well as had many television appearances. He lives in Cape Elizabeth, Maine.