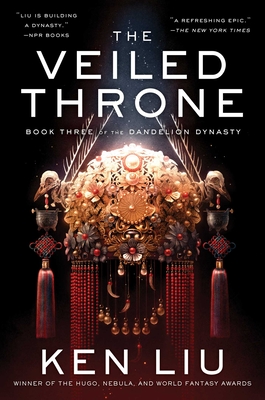 This is book number 3 in the The Dandelion Dynasty series.

With the invasion of Dara complete, and the Wall of Storms breached, the world has opened to new possibilities for the gods and peoples of both empires as the sweeping saga of the award-winning Dandelion Dynasty continues in this third book of the “magnificent fantasy epic” (NPR).

Princess Théra, once known as Empress Üna of Dara, entrusted the throne to her younger brother in order to journey to Ukyu-Gondé to war with the Lyucu. She has crossed the fabled Wall of Storms with a fleet of advanced warships and ten thousand people. Beset by adversity, Théra and her most trusted companions attempt to overcome every challenge by doing the most interesting thing. But is not letting the past dictate the present always possible or even desirable?

In Dara, the Lyucu leadership as well as the surviving Dandelion Court bristle with rivalries as currents of power surge and ebb and perspectives spin and shift. Here, parents and children, teachers and students, Empress and Pékyu, all nurture the seeds of plans that will take years to bloom. Will tradition yield to new justifications for power?

Everywhere, the spirit of innovation dances like dandelion seeds on the wind, and the commoners, the forgotten, the ignored begin to engineer new solutions for a new age.

Ken Liu returns to the series that draws from a tradition of the great epics of our history from the Aeneid to the Romance on the Three Kingdoms and builds a new tale unsurpassed in its scope and ambition.
Ken Liu is an award-winning American author of speculative fiction. His collection, The Paper Menagerie and Other Stories, has been published in more than a dozen languages. Liu’s other works include The Grace of Kings, The Wall of Storms, The Veiled Throne, and a second collection The Hidden Girl and Other Stories. He has been involved in multiple media adaptations of his work including the short story “Good Hunting,” adapted as an episode in Netflix’s animated series Love, Death + Robots; and AMC’s Pantheon, adapted from an interconnected series of short stories. “The Hidden Girl,” “The Message,” and “The Cleaners” have also been optioned for development. Liu previously worked as a software engineer, corporate lawyer, and litigation consultant. He frequently speaks at conferences and universities on topics including futurism, cryptocurrency, the history of technology, and the value of storytelling. Liu lives with his family near Boston, Massachusetts.
"Epic fantasy fans will enjoy this large-scale story of political strategy and skullduggery."
— Publishers Weekly

"Ken Liu's The Grace of Kings [is] a magnificent fantasy epic. Liu is building a dynasty."
— NPR Books

"The Grace of Kings is an ambitious, astonishing, and sublime work, one that both exemplifies and diverges from what one might think of when it comes to epic fantasy. It should rank amongst the genre's best works."
— io9

"Liu’s combination of elements from China, Polynesia and beyond, told in an epic style, is the kind of Silk Road Fantasy that I’ve always wanted to read, and love all the more now that I have."
— SF Signal

"The Grace of Kings is a fantasy, with petty meddling gods, odd mechanized inventions, and a sense that mystical powers lurk around the corner. It is nothing if not epic."
— Tor.com

"It surpasses The Grace of Kings in every way, by every conceivable metric, and is—astonishingly—perfectly readable as a standalone."
— NPR Books

"Liu’s characters are a delight, the worldbuilding is unusual and impeccable, and the writing is smooth and luminous. This tale of divided loyalties, deadly ambition, and “silkpunk” technology delivers enough excitement and sense of wonder to enchant any fan of epic fantasy."
— Publishers Weekly, Starred Review