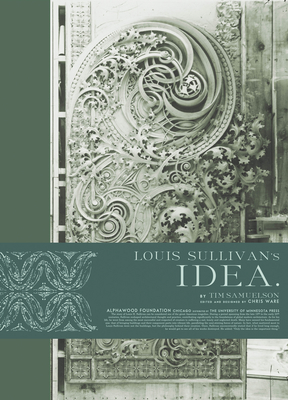 The story of Louis H. Sullivan is considered one of the great American tragedies. While Sullivan reshaped architectural thought and practice and contributed significantly to the foundations of modern architecture, he suffered a sad and lonely death. Many have since missed his aim: that of bringing buildings to life. What mattered most to Sullivan were not the buildings but the philosophy behind their creation. Once, he unconcernedly stated that if he lived long enough, he would get to see all of his works destroyed. He added: “Only the idea is the important thing.”

In Louis Sullivan’s Idea, Chicago architectural historian Tim Samuelson and artist/writer Chris Ware present Sullivan’s commitment to his discipline of thought as the guiding force behind his work, and this collection of photographs, original documentation, and drawings all date from the period of Sullivan's life, 1856–1924, that many rarely or have never seen before. The book includes a full-size foldout facsimile reproduction of Louis Sullivan’s last architectural commission and the only surviving working drawing done in his own hand.

Tim Samuelson is the administrator of his own lifetime architectural preservation archive, and is the City of Chicago’s cultural historian and former curator of architecture and design at the Chicago Historical Society. Since age seven his primary and long-term interest has been the story of Chicago’s architecture, especially the work of Louis H. Sullivan.

Chris Ware’s work has appeared in the MCA Chicago, the Whitney Museum of American Art and The New Yorker, and his books have been named year-end top ten fiction selections by the New York Times and Time magazine.