Stella Keeps the Sun Up (Hardcover) 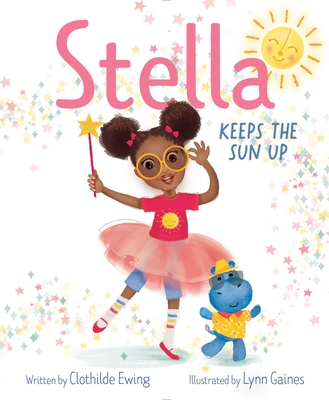 Stella Keeps the Sun Up (Hardcover)


IN STOCK - On Our Shelves Now
In this incandescently fun, hijinks-filled picture book, a young girl schemes to keep the sun up in the sky so she never has to go to bed.

If Stella had her way, she would stop sleeping on her sixth birthday. Because sleep is boring. And there are so many better things you could be doing. And Stella is tired of being tired. So she comes up with a plan. People only have to go to bed when it gets dark, and it only gets dark because the sun goes down. If she can keep the sun in the sky, she and her best friend, Roger, can stay up for a hundred years!

They enact their magnificent, wonderful, genius plan, offering the sun a cup of coffee, shining a light at it so it will shine back, and jumping on a trampoline to reach the sun and push it higher. But before long, Stella begins to wonder…are there downsides to keeping the sun up forever?
Clothilde Ewing started her work life as a lifeguard, but she has spent most of her career telling people’s stories as a journalist (CBS News), television producer (The Oprah Winfrey Show), and communications professional. She loves using the written word to honor a child’s imagination and is on a mission to help adults tap into the wonder they felt as children. She believes that one of the greatest lessons we can pass on to our kids is that differences are for celebrating, and that we have more in common than we ever imagined. A native of Cleveland, she lives in Chicago with her husband and two highly energetic children.

Lynn Gaines has been making art for years and is still in love with making it! Born and raised in Ohio, she currently works for American Greetings, but also loves making art for children’s books and kids-related products. She works both digitally and traditionally, often combining the two. She hasn’t met a craft she doesn’t love—sewing is one of her favorite hobbies. She looks for inspiration everywhere and often finds it in bookstores and thrift stores, looking in vintage children’s books and animation, and even in a garden or two. In her spare time, she is a bit of an illustration nerd, loves to roller skate, read, and toy with writing. Lynn lives in Northeast Ohio with her husband Mel and two fur-kids and studio mates, Charlie and Harry.
This bedtime story would be useful for reluctant sleepers or to introduce children to the concept of time zones.
— School Library Journal

An epiphany that provides a well-timed reason to embrace nighttime rituals, and adult readers with a fresh reason for arguing in favor of a good night’s rest.
— Publishers Weekly