The Princess in Black and the Prince in Pink (Hardcover) 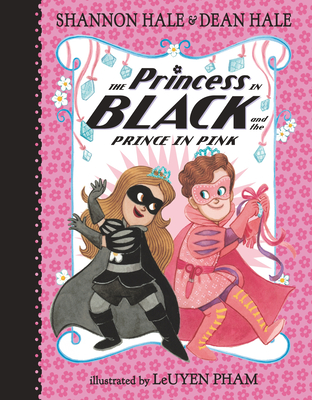 The Princess in Black and the Prince in Pink (Hardcover)

This is book number 10 in the Princess in Black series.

When plans for a ball run a-fowl, Princess Magnolia accepts the help of a valiant new hero to save her secret decorations—and the entire evening!

Princess Magnolia is at the Flower Festival prepping for the evening ball when suddenly she hears a commotion. Oh no! She isn’t prepared to fight a monster or . . . a grumpy emu! To her surprise, a knight in shining armor comes to the rescue, but not before the princess’s prized decorations are stomped on and destroyed. Luckily, the gallant Prince Valerian has his own secret identity—the Prince in Pink—and has been yearning for a chance to show off his special skills, with the help of some twinkle-twinkle and major glam. Glitter has been restored, but then the angry emu returns—with friends! Can the party heroes step up to save the day again? Expect the unexpected as this sparkling new entry in the New York Times best-selling series takes the floor with a flourish.
Shannon Hale and Dean Hale are the award-winning husband-and-wife team behind the Princess in Black series, illustrated by LeUyen Pham. Shannon Hale is also the author of the Newbery Honor Book Princess Academy as well as the New York Times best-selling graphic novels Real Friends and Best Friends, illustrated by LeUyen Pham. Shannon Hale and Dean Hale live in Salt Lake City, Utah.

LeUyen Pham is the illustrator of the Princess in Black series as well as many other books for children, including Love Is Powerful by Heather Dean Brewer, Pat-a-Cake by Mary Brigid Barrett, God’s Dream by Archbishop Desmond Tutu and Douglas Carlton Abrams, Aunt Mary’s Rose by Douglas Wood, and Real Friends and Best Friends by Shannon Hale. LeUyen Pham lives in California.
This entertaining series centers a lovable, empowered female character; this is a princess who can save herself and still be frilly. . ­. . A wonderful addition to Hale’s unique series, wherein zany humor and teamwork tells the story that children can be anything they dream of.
—School Library Journal