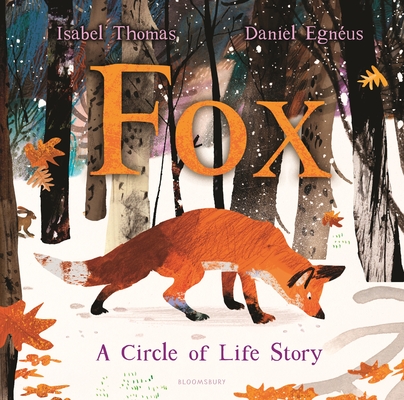 From the author and illustrator behind the acclaimed Moth, a scientific look at the circle of life.

In the frost-covered forest of early spring, fox is on a mission to find food for her three cubs. As they grow, she teaches them how to survive in the wild. Until one day, fox dies. Her body goes back to earth and grass and air, nourishing the world around her and bringing the forest to life. Death is not just an end, it's also a beginning.

With gorgeous illustrations and lyrical, kid-friendly text, Fox: A Circle of Life Story answers the big scientific question: What happens when animals die?

Isabel Thomas is a science writer and the author of a galaxy of books for young audiences. They include Moth: An Evolution Story, illustrated by Daniel Egnéus, which won the AAAS/Subaru Prize for Excellence in Science Books. She also writes for science magazines including The Week Junior Science + Nature and creates STEM outreach resources for organizations such as the Wellcome Sanger Institute and the BBC. Isabel studied Human Sciences at the University of Oxford and Education Research at the University of Cambridge. www.isabelthomas.co.uk |@isabelwriting

“An adept and impressive handling of a sensitive subject.” —Kirkus Reviews, starred review

"Though it evokes sympathy at the death of the fox, the words and pictures deftly depict the true outcome of this process: Mother Fox gave back to the Earth, enriching the life all around her. The close-up, natural environment shown within the illustrations will engage readers and make them feel as if they are close by watching the scenes unfold." - School Library Connection