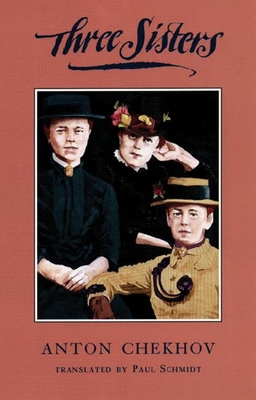 
OUT OF STOCK - Please contact store for expected availability
"Wonderfully fresh and affecting." - Ben Brantley, New York Times "This lucid interpretation rewards with its deep understanding of a complex play." -David Rooney, Hollywood Reporter The works of Russia's greatest playwright, Anton Chekhov, masterfully blend comedy and pathos, creating a richness of texture and characterization rarely seen since Shakespeare. With Three Sisters (1901), his portrait of the Prozorov family's elusive dream of returning from the provinces to an idealized Moscow, he captured a restlessness and yearning which remain enduringly modern. In Paul Schmidt's version - the basis for the Wooster Group's acclaimed adaptation Brace Up - we can perceive, for the first time in English, a refreshingly clear and colloquial style we instinctively know as Chekhov's own. ANTON CHEKHOV (1860-1904) led a double life as a practicing physician and a celebrated author of short stories and plays. The Moscow Art Theater's stagings of The Seagull, Uncle Vanya, The Cherry Orchard and Three Sisters - under the direction of Konstantin Stanislavsky - secured Chekhov's reputation as a world-class dramatist. PAUL SCHMIDT edited Meyerhold at Work and has translated writings by Rimbaud, Khlebnikov, Gogol, Kaiser, Mayakovsky and Genet. Recipient of an NEA fellowship and of a doctorate in Russian from Harvard University, his translations, adaptations and original plays have been performed across the country.