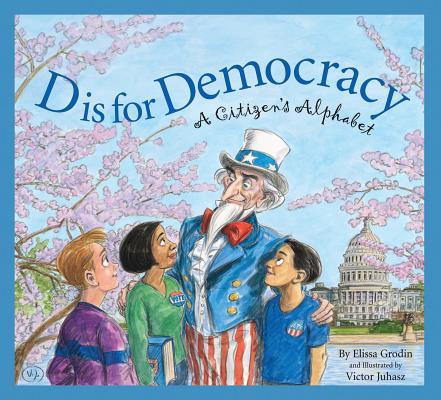 
Out of Stock - Please contact store for availability and price
Illustrated by Victor JuhaszDemocracy -- America has it and it seems like many other countries want it. But what exactly is a democracy and how easy is it to maintain? Despite the banter in today's media, many Americans are still in the dark when it comes to knowing and acting upon their rights and responsibilities as citizens of a democratic society. In refreshingly candid and straight-to-the-point language author Elissa Grodin takes readers of all ages on an A-Z trip through our government's structure, from its earliest beginnings to definitions of basic components and concepts (including immigration and taxation). Engaging, disarming, and frequently thought-provoking artwork from illustrator Victor Juhasz emphasizes the magnitude of the subject. From founding fathers, first ladies, and the First Amendment to the presidential oath of office, D is for Democracy details the political processes, parties, and people of democracy, American-style. Elissa D. Grodin grew up in a large family in Kansas City, Missouri, and was fifteen years old when she started to write short stories. While living in London in the late '70s, she wrote for the Times Literary Supplement and New Statesman. After moving to New York, she studied at the School of Visual Arts and met her husband, actor Charles Grodin, while interviewing him for American Film magazine. D is for Democracy is her second children's book with Sleeping Bear Press. She also wrote N is for Nutmeg: A Connecticut Alphabet. Elissa lives with her family in Wilton, Connecticut. A graduate of the Parsons School of Design, Victor Juhasz began illustrating in 1974 while still a student and has been working non-stop ever since.His humorous illustrations and caricatures have been commissioned by major magazines, newspapers, advertising agencies, and book publishers both national and international, and his clients include Time, Newsweek, The New Yorker, Rolling Stone, The New York Times, The Washington Post, and GQ. Victor lives in Elizabeth, New Jersey.