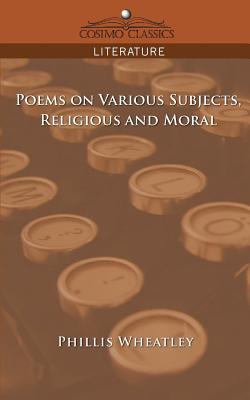 
OUT OF STOCK - Please contact store for expected availability
WE whose Names are under-written, do assure the World, that the POEMS specified in the following Page, were (as we verily believe) written by Phillis, a young Negro Girl, who was but a few Years since, brought an uncultivated Barbarian from Africa... -from the publisher's affidavit Probably the first Black American writer, Phillis Wheatley had to travel to England to see her work published in this 1773 volume, the first collection of poetry by an African America to see print. Her work, considered even at the time sentimental and derivative, was harshly criticized by many, including Thomas Jefferson, and the novelty of its author soon waned to the point that the emancipated Wheatley died in poverty and obscurity. But as one of the earliest firsthand accounts of the slavery in America, it is an important document of life in the colonial era: Some view our sable race with scornful eye, "Their colour is a diabolic die." Remember, Christians, Negroes, black as Cain, May be refin'd, and join th' angelic train. (from " On being brought from Africa to America") PHILLIS WHEATLEY (c.1753-1784) was captured at the age of around seven and brought to America in 1761, where she became a house slave-and near adopted daughter-of Boston merchant John Wheatley. Demonstrating a talent for languages, she was educated alongside the Wheatley children. After being granted her freedom, she married John Peters, a free Black Bostonian.