Fear Your Future: How the Deck Is Stacked against Millennials and Why Socialism Would Make It Worse (New Threats to Freedom Series) (Paperback) 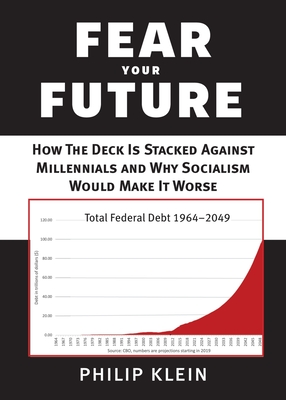 Fear Your Future: How the Deck Is Stacked against Millennials and Why Socialism Would Make It Worse (New Threats to Freedom Series) (Paperback)


IN STOCK - On Our Shelves Now
It’s become fashionable to demean millennials as the “snowflake” generation. Raised during the peace and prosperity of the ‘90s, they’re often perceived as carrying an entitlement mentality and of being incapable of handling adversity. But Philip Klein sees them differently. Given the economic headwinds they faced at the start of their working lives, millennials have shown commendable fortitude.  And as Klein argues, they will need to maintain this character strength going forward because further challenges loom in their future.
The aftershocks of the Great Recession, the skyrocketing cost of living, and the titanic weight of student loan debt have made the American Dream seem to be forever retreating toward the horizon. As if that weren’t enough, millennials will face the largest federal debt in history as boomers retire and extract trillions of dollars from Social Security and Medicare—far more than they contributed.
Now politicians clamoring for the millennial vote in 2020 are making overtures toward socialism, and millennials are responding positively—understandably so, considering how the economic cards are stacked against them. But, as Philip Klein shows, the reality is that such policies would only make their burden infinitely heavier.
In this concise, data-driven book, Klein begins the work of brightening the future for millennials by analyzing the problem compassionately yet objectively. There are real reasons to worry about what lies ahead if nothing changes. But the facts laid out in Klein’s book can steer the conversation to realistic solutions.

Philip Klein is the executive editor of the Washington Examiner. He formerly served as the Examiner's managing editor and commentary editor. Prior to that, he was a Washington correspondent for the American Spectator and a reporter for Reuters. He is a graduate of George Washington University and holds a master's degree in journalism from Columbia University. He is the author of Overcoming Obamacare: Three Approaches to Reversing the Government Takeover of Health Care.

“Read it and weep, millennials. Philip Klein efficiently demonstrates why it is remarkable that there is not generational conflict. Yet.” —George F. Will

“Philip Klein has written a powerful wake-up call to the rising generation. He shows just how badly millennials have been disserved by decades of reckless public policy, but he also offers them some ways forward. This is essential reading for anyone who thinks our politics must care about the future.” —Yuval Levin, author of The Fractured Republic and editor of National Affairs

“Both political parties in Washington are drunk on debt, and Klein is begging millennials to demand that DC sober up before it’s too late. Rather than bashing or ridiculing our generation with lazy stereotypes, Fear Your Future offers a rigorous diagnosis of the daunting fiscal challenges on our collective plate. Fellow millennials, please join me in taking a short break from scrolling through Instagram to read this short, digestible book. The clock is ticking, and we’re getting screwed.” —Guy Benson, political editor of Townhall.com and Fox News contributor

“A terrific book. Philip Klein meticulously details the economic challenges faced by millennials—and why more government regulation, debt, and taxes are not the answer.” —Brian Riedl, senior fellow at the Manhattan Institute