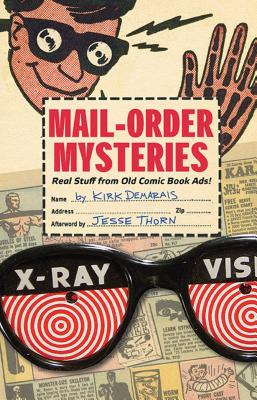 
Not Available
Rediscover your sense of wonder Generations of comic book readers remember the tantalizing promises of vintage novelty advertisements that offered authentic laser-gun plans, x-ray specs, and even 7-foot-tall monsters (with glow-in-the-dark eyes ). But what would you really get if you entrusted your hard-earned $1.69 to the post office? Mail-Order Mysteries answers this question, revealing the amazing truths (and agonizing exaggerations) about the actual products marketed to kids in the '60s, '70s, and '80s. Pop-culture historian Kirk Demarais shares his astonishing collection, including: 100 Toy Soldiers in a Footlocker Count Dante's World's Deadliest Fighting Secrets GRIT Hercules Wrist Band Hypno-Coin Life-Size Monsters Mystic Smoke Sea Monkeys Soil From Dracula's Castle U-Control Ghost Ventrilo Voice Thrower ...and many, many more With more than 150 extraordinary, peculiar, and downright fraudulent collectibles, Mail-Order Mysteries is a must-have book comic book fans everywhere. Trust us.
Kirk Demarais is a freelance creator and author of Life of the Party, a visual history of the S.S. Adams Prank and Magic Company. He wrote and directed Flip, an awardwinning short film inspired by mail-order novelties, and he codirected Foot, an animated film distributed by bobblehead maker FunKo. In addition to neglecting his retro culture website, SecretFunSpot, Kirk's pop-surrealist artwork is regularly shown at L.A.'s Gallery 1988. Kirk enjoys life in the hills of Arkansas with his wife and son and a ghost. Jesse Thorn is the host and creator of The Sound of Young America radio show on Public Radio International, where he has interviewed such guests as Mark Evanier, Weird Al Yankovic, and Judd Apatow. He is also the founder of production organization Maximum Fun, as well as the host of The Grid, a cultural recommendation program on the Independent Film Channel (IFC). He lives in Los Angeles with his wife Theresa.