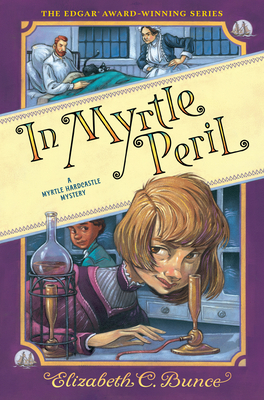 This is book number 4 in the Myrtle Hardcastle Mystery series.

Myrtle Hardcastle—twelve-year-old Victorian Amateur Detective—returns to investigate the case of a missing heiress lost at sea, an inquiry that runs aground when a murder in plain sight has no apparent victim.

When a mysterious girl attempts to stake her claim to the Snowcroft family fortune, Myrtle Hardcastle’s father, a lawyer, is asked to help prove—or disprove—the girl’s identity. Is this truly Ethel Snowcroft, believed to be lost at sea with her parents, or a con artist chasing a windfall? Mr. Hardcastle’s pursuit of the case takes a detour when he’s hospitalized for a tonsillectomy—only to witness a murder. Or does he? With no body at the scene, Myrtle and her governess, Miss Judson, fear the so-called murder was a feverish delusion—until a critical piece of evidence appears.

But where’s the victim? And who at the hospital could be harboring murderous intent? Myrtle is determined to find out before the killer comes after her father.
With stakes this high, her sleuthing has put Myrtle, her family, and the patients and staff at the Royal Swinburne Hospital In Myrtle Peril.

Elizabeth C. Bunce grew up on a steady diet of Sherlock Holmes, Trixie Belden, and Quincy, M.E., and always played the lead prosecutor in mock trial. She has never had a governess, and no one has ever accused her of being irrepressible, but a teacher did once call her “argumentative”—which was entirely untrue, and she can prove it. She lives in Kansas City with her husband and their cats. You can find her online at elizabethcbunce.com.

“Another thrilling mystery from our young Victorian sleuth…Enthusiastically, chaotically delightful.”