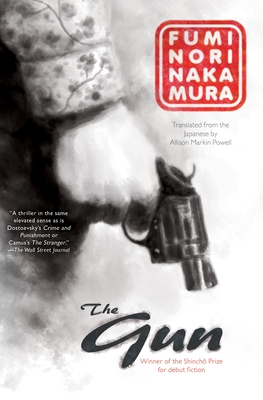 “Alienation and obsession are dissected in this unsettling, spare novel. Nishikawa, a listless college student, happens upon a dead man during a nighttime walk. He inexplicably picks up the pistol lying by the body and brings it to his apartment. From this precipitous moment, the weapon becomes an obsession. Nishikawa finds his tedious reality taking on new meaning through the possibilities of an object that was designed to kill, and yet he must conceal his fetish from his classmates, lovers, and -- most importantly -- the police, who suspect that he has the gun. This award-winning noir novel, translated from Japanese, is an unflinching, dark story of one man's expanding consciousness -- and threat.”
— Cindy Pauldine (W), The River's End Bookstore, Oswego, NY

A Tokyo college student’s discovery and eventual obsession with a stolen handgun awakens something dark inside him.

On a nighttime walk along a Tokyo riverbank, a young man named Nishikawa stumbles on a dead body, beside which lies a gun. From the moment Nishikawa decides to take the gun, the world around him blurs. Knowing he possesses the weapon brings an intoxicating sense of purpose to his dull university life. But soon Nishikawa’s personal entanglements become unexpectedly complicated: he finds himself romantically involved with two women while his biological father, whom he’s never met, lies dying in a hospital. Through it all, he can’t stop thinking about the gun—and the four bullets loaded in its chamber. As he spirals into obsession, his focus is consumed by one idea: that possessing the gun is no longer enough—he must fire it.
Fuminori Nakamura was born in 1977 and graduated from Fukushima University in 2000. He has won numerous prizes for his writing, including the Ōe Prize, Japan’s largest literary award; the David L. Goodis Award; and the prestigious Akutagawa Prize. The Thief, his first novel to be translated into English, was a finalist for the Los Angeles Times Book Prize. His other novels include The Kingdom, Evil and the Mask, The Boy in the EarthLast Winter, We Parted.
Praise for The Gun

"A thriller in the same elevated sense as is Dostoevsky’s Crime and Punishment or Camus’s The Stranger . . . ​Nature versus nurture, free will versus fate: Such are the themes that flicker almost subliminally through this shocking narrative, which also emits echoes of Poe and Mishima."
—Tom Nolan, The Wall Street Journal

"More a suspenseful study of obsession than a crime novel, Nakamura’s noir story, translated by Allison Markin Powell, is about liberation . . . Love, even illicit love, has a way of bringing out the best—or the worst—in ­a person."
—The New York Times Book Review

"[Nakamura] tightens the screws on his character with eerie effectiveness, making the inevitable outcome shudder on the page."
—Chicago Tribune

"[The Gun] offers an addictive—one might even say compulsive—night’s worth of chillingly unnerving entertainment."
—The Richmond Times-Dispatch

"[Nakamura] straddles the crime-literary fiction boundary like few others. It gives a new twist to Chekhov’s rule: a gun mentioned in the first act—or here, a gun found by a dead body in the opening pages—must eventually be fired."
—Maclean's

"A compelling study of a man whose deep wounds begin to open when, by accident, he stumbles across a gun. Nakamura understands how a life can swirl and eddy around an inanimate object, becoming so possessed by it as to suddenly be not a life at all."
—Brian Evenson, author of Windeye

"[Nakamura] spins dark, brooding tales of crime, deftly using acts such as murder and theft as unsettling ruminations on the human psyche and its predilection for darkness."
—The Straits Times (Singapore)

"An unforgettable, heart-pounding journey into the world of psychological suspense."
—Crimespree Magazine

"The psychological downward spiral into obsession is what drives this book, and during my reading, I couldn’t help but think that Alfred Hitchcock could have created a brilliant film adaptation."
—Bruce Tierney, BookPage

"Another masterwork from one of the best modern practitioners of the crime novel."
—World Literature Today

"Nakamura does obsessive and delusional very well . . . A fine first effort by a talented writer."
—The Complete Review

"No crime author out there is currently doing what Fuminori Nakamura is doing. I’ve read every novel of his Soho Press has translated and they’ve all been unique in their subject matter and tone and exactly the same in terms of effectiveness and the wonderfully bizarre, oblique way in which Nakamura approaches the genre."
—Gabino Iglesias, Dead End Follies

"[An] intense work of suspense and increasing madness."
—Kingdom Books

"An incredibly tense story about how obsession can mold your actions and how an inanimate object can become animate in the 'right' pair of hands."
—Old Firehouse Books, Ft. Collins, Colorado

"The author does more in less than 200 pages than most authors could pull off in 600 . . . Stripped down, focused, intense, and worth every second you spend reading."
—Bookgasm

"Suspenseful to the last page, Nakamura’s existential noir translates well to America, [and is] a timely allegory for our gun-crazed culture."
—Library Journal

"This portrait of obsession and madness starts slowly but soon exerts an almost hypnotic pull as we contemplate both the extent of Nishikawa’s alienation and the primal allure of these little machines for killing."
—Booklist

"[Nakamura] paints the story in short strokes, capturing nuance in simple, short sentences, somehow squeezing out the personal in cold prose. His story is small in the sense that it is only one person’s strange world we see; yet universal in the way it characterizes how we might be led into it."
—Ronald Tierney

"This slim, icy, outstanding thriller, reminiscent of Muriel Spark and Patricia Highsmith, should establish Fuminori Nakamura as one of the most interesting Japanese crime novelists at work today."
—USA Today

"The Thief brings to mind Highsmith, Mishima and Dostoevsky . . . A chilling existential thriller leaving readers in doubt without making them feel in any way cheated."
—The Wall Street Journal, Best Book of the Year Selection

"Deliciously twisted . . . Nakamura bend[s] the line between what is good and what is evil until it nearly breaks. It's impressive how a book so dark can be so much fun."
—Grantland

"His grasp of the seamy underbelly of the city is why Nakamura is one of the most award-winning young guns of Japanese hardboiled detective writing."
—Daily Beast

"Nakamura's prose is cut-to-the-bone lean, but it moves across the page with a seductive, even voluptuous agility."
—Richmond Times-Dispatch