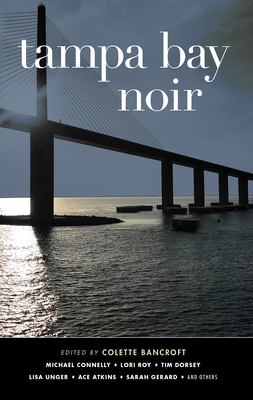 At last, the popular Akashic Noir series has adopted the Tampa Bay area...The notion of elevating place to the status of a character in a story, a frequent topic in writers workshops, works to maximum effect. The descriptive forays are full of observations that can only be gleaned by living here.
--Tampa Bay Times

Colette Bancroft's story, The Bite, has received the 2021 Robert L. Fish Memorial Award, presented by the Mystery Writers of America

A new collection of noir fiction features all sorts of miscreants finding their way through this part of Florida.
--Ocala Star Banner

Tampa Bay Noir] has a contributor list that includes a handful of bestselling crime novelists, but more importantly, the stories are pretty excellent, too.
--Mystery Scene Magazine

Tampa Bay gets a much-deserved turn in the spotlight with this new collection.
--CrimeReads, One of the Most Anticipated Crime Books of 2020

Anyone who lives in the Tampa Bay area knows there are stories of intrigue here, just waiting to be told.
--The Gabber

Being a local, it's cool to read about locations and think, 'I've been there.' Tampa has enough sordid and colorful history to deserve another volume.
--Ink19

Akashic Books continues its award-winning series of original noir anthologies, launched in 2004 with Brooklyn Noir. Each book comprises all new stories, each one set in a distinct location within the geographic area of the book.

From the introduction by Colette Bancroft:

Ask most people what the Tampa Bay area is famous for, and they might mention sparkling beaches and sleek urban centers and contented retirees strolling the golf courses year-round. But it's always had a dark side. Just look at its signature event: a giant pirate parade.

Not only does Gasparilla honor the buccaneer traditions of theft, debauchery, and violence; its namesake pirate captain, Jos Gaspar, is a fake who probably never existed. And if there's any variety of crime baked into Florida's history, it's fraud. From the indigenous residents who supposedly conned Spanish explorers seeking the Fountain of Youth through the rolling cycles of real estate scams that have shaped the Sunshine State for the last century or so, the place is a grifter's native habitat.

COLETTE BANCROFT has been the book editor at the Tampa Bay Times since 2007. In addition to writing reviews and interviewing authors, she directs the annual Tampa Bay Times Festival of Reading. She served two terms on the board of the National Book Critics Circle. Bancroft earned degrees in English from the University of South Florida and the University of Florida, and she wishes she had finished her dissertation on the novels of Raymond Chandler.