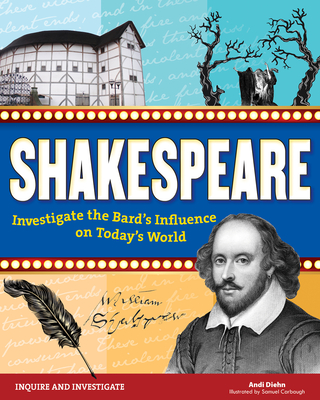 "Romeo, Romeo, wherefore art thou Romeo?" Teenagers have been sighing an approximation of these words for centuries, ever since William Shakespeare had Juliet utter them from her balcony in one of the most popular plays of all time, Romeo and Juliet. Tales of love, loss, rebellion, rivalry--before there was Twilight, Warm Bodies, and The Lion King, there was Shakespeare. The characters, language, imagery, and plot elements of many books and movies that appear on bookshelves and in cinemas today are directly influenced by the plays of the Bard.

In Shakespeare: Investigate the Bard's Influence on Today's World, readers discover links between the books, movies, and music they listen to today and the words that were written and acted out more than 400 years ago. Readers deconstruct Shakespearean themes, imagery, language, and meaning by finding familiar ground on which to gain literary insight. Through hands-on projects such as coding a video game based on one of Shakespeare's plays to rewriting a scene in the text language of emoji, readers find compelling avenues into the dramatic, sometimes intimidating language, leaving them well-equipped to tackle any major text in the academic years to come.