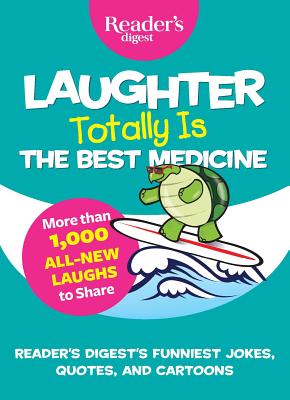 
OUT OF STOCK - Please contact store for expected availability
More than 1,000 of the funniest, laugh-out-loud jokes, quips, quotes, anecdotes, and cartoons from Reader’s digest magazine—guaranteed to put laughter in your day.

This collection of laugh-out-loud, clean jokes, one-liners, and other lighthearted glimpses of life—drawn from Reader’s Digest magazine’s most popular humor columns—is sure to tickle the funny bone. Packed with more than 1,000 jokes, anecdotes, funny things kids say, cartoons, quotes, and stories contributed by professional comedians, joke writers, and readers of the magazine, this side-splitting compilation pokes fun at the facts and foibles of daily routines, illustrating that life is often funnier than fiction.


ABOUT READER’S DIGEST MAGAZINE
The Reader’s Digest Association, Inc. is a global multi-brand media company that educates, entertains and connects audiences around the world. It publishes 92 magazines, including 50 editions of Reader’s Digest, the world’s largest paid-circulation magazine. With a rate base of 5.5 million and more than 32 million readers, Reader’s digest is the largest magazine in the country.