Seeking Freedom: The Untold Story of Fortress Monroe and the Ending of Slavery in America (Hardcover) 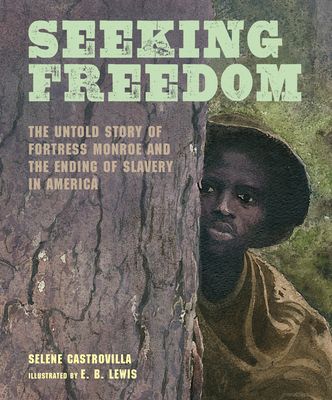 Seeking Freedom: The Untold Story of Fortress Monroe and the Ending of Slavery in America (Hardcover)


OUT OF STOCK - Please contact store for expected availability
In this dramatic Civil War story, a courageous enslaved fugitive teams with a cunning Union general to save a Union fort from the Confederates–and triggers the end of slavery in the United States. This is the first children's nonfiction book about a Black unsung hero who remains relevant today and to the Black Lives Matter movement.

On the night Virginia secedes from the Union, three enslaved men approach Fortress Monroe. Knowing that Virginia's secession meant they would be separated from their families and sent farther south to work for the Confederacy, the men decided to plead for sanctuary. And they were in luck.

The fort's commander, Benjamin Butler, retained them--and many more that followed--by calling them "contraband of war." Butler depended on the contrabands to provide information about the Confederates. He found the perfect partner in George Scott, one of the contrabands, whose heroism saved the fort from enemy hands. And, it was the plight of the contrabands that convinced President Lincoln that slavery MUST be abolished and inspired him to write his Emancipation Proclamation, ending slavery in the rebellious states.
Selene Castrovilla is an award-winning nonfiction and fiction author who holds an MFA in creative writing from The New School and a BA in English from New York University. Her other titles with Calkins Creek include REVOLUTIONARY FRIENDS and REVOLUTIONARY ROGUES.

E. B. Lewis is award-winning illustrator and fine artist, who has illustrated over 70 books for children, including THE OTHER SIDE by Jacqueline Woodson, PREACHING TO THE CHICKENS by Jabari Asim, and THE SECRET WORLD OF WALTER ANDERSON by Hester Bass. Lewis attended the Temple University Tyler School of Art where he majored in graphic design, illustration and art education. After graduating, he taught art in public schools for twelve years. Presently, E.B. teaches at the Pennsylvania Academy of Fine Arts.
Illustrator site: eblewis.com
★ "Besides telling [George] Scott’s dramatic story, the narrative highlights [Benjamin] Butler’s pivotal decision to regard people who escaped slavery as contraband—a legal strategy enabling the U.S. Army to protect them. With a muted palette featuring grays, greens, browns, and pale, tawny yellows, Lewis creates a series of haunting watercolor paintings that make Scott’s story intense and memorable. This beautifully illustrated picture book enables readers to see the Civil War from a different point of view." —Booklist, starred review

★ "This is a thrilling tale of bravery and cunning, the courage of [George] Scott, and the shrewd actions of General [Benjamin] Butler...Fascinating facts combine with vivid illustrations in a truly powerful recounting of a crucial point in history." —School Library Connection, starred review

★ "This little-known glimpse of Civil War history fills in gaps that are so essential in creating a fuller picture of the history of this country...This is an important and essential addition to all books on American history, the American Civil War and Black history." —Youth Services Book Review, starred review

"The story of how two men and a fortress paved the way to freedom for an entire population. The succinct text allows the art to take center stage while relaying pertinent information... rich backmatter... gives a more in-depth look. The watercolor illustrations present eye-catching images... (a) dramatic, superbly illustrated account of a little-known story." —Kirkus Reviews

"A true story from the Civil War offers insight into a little-known aspect of African American history. Castrovilla’s straightforward narrative style makes the events readily accessible to readers who are interested in this complex era of American history. Lewis’s atmospheric watercolors convey themes of urgency and humanity.” —The Horn Book

“Castrovilla keeps the Scott/Butler story focused and taut, relegating historical context and legalese to well-organized end matter that also includes biographical sketches of the two protagonists. Lewis’ atmospheric watercolors ably convey the tenebrous forest and battle settings in which Scott risked his life, highlighting the heroism of a man who slipped out of and then back into history’s shadow.” —Bulletin of the Center for Children’s Books

“Much of the history of Black people in this country has been omitted, ignored, or rendered insignificant by those who write about American history. Without that history, the American story and world history are grossly incomplete. Thankfully, today, more books are being published that accurately spotlight the Black experience. Seeking Freedom: The Untold Story of Fortress Monroe and the Ending of Slavery in America tells a story I did not know and is one that should be told!” —Wade Hudson, author of Defiant: Growing Up in the Jim Crow South and Recognize: An Anthology Honoring and Amplifying Black Life