The Lighter Side of Life: Humorous anecdotes and stories from an uncommon-sense perspective (Hardcover) 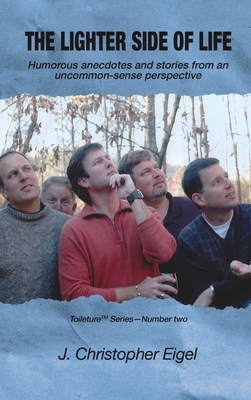 The Lighter Side of Life: Humorous anecdotes and stories from an uncommon-sense perspective (Hardcover)


OUT OF STOCK - Please contact store for expected availability
faint] Praise for THE LIGHTER SIDE OF LIFE "These stories are absolutely hysterical, and the writing is top-notch. I can't tell you how much I enjoy reading them. Really, I can't. But we'll rally the fan base and alert the media " -ANNE BRIDGES, Eigel's Fan Club President (and sole fan) "JEFF FOXWORTHY would have liked this book more than the first book had he read either of them." -Anonymous "Eigel is a prolific writer. But I was shocked he knocked my book, "How I Saved the World" off the New York Times #1 spot with this piece of ... toileture." -What JESSE WATTERS likely would have said had he read this book and it actually went to #1. "This is by far one of the best comedic books my son has ever written. But I still don't understand why so many of these stories have to have alcohol and bad words in them" -SUZANNE, Eigel's mom "I can't believe he wrote a second book And now I'm one of the stupid chapters. He needs to get a real job... Anyone?" -MAUREEN, Eigel's wife About the Author Eigel grew up loving the likes of Lewis Grizzard and Paul Harvey and has a passion for the written word. Starting in 1996, he began writing an annual letter at Christmas to be the antithesis of the typical letters. A humorous picture, self-deprecating humor and sarcasm would be the impetus of his Christmas Epistle. Eventually the anecdotes were expounded into blog stories. After much prodding and pushing, the author refined, wrote and published those stories and many more in these first two books: Toileture Series-Book One and Toileture Series-Number Two. Look for the third in the series in late 2023. Anyone from Baby Boomer's to Millennial's, who appreciates sarcasm, will laugh out loud at the stories and often relatable life experiences.