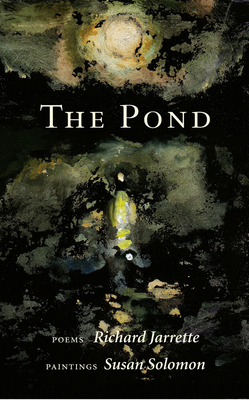 The Pond is a mutually long sought collaboration between kindred artists and souls. Susan and Richard were in dialogue with paintings and poems prior to conceiving The Pond and are thrilled to travel the entire poem cycle together. Both artists experience the world as a living entity of indivisible parts that are in constant dialogue with one another including their human nature. They work in the tradition of the Mountain and River Poets of China for whom consciousness and experience flow through cycles of birth and death with all things as one intelligence and thus they wish their artist works to voice their part in the large conversation. The physical pond is a portal to stars, moon, silence, creatures, memory, loss, longing, becoming, dying, rebirth, culture, and praise. The art works follow a complete cycle of the seasons and each is also a reflective portal to the immediate and infinite—bird, frog, evening star, shadows—hand in hand. Susan and Richard have long been alarmed by the loss of a sense of the sacred regarding nature and the coarsening of culture that renders all mere product. These artists take personal responsibility to witness, grieve, praise, and preserve, arm in arm with everyone and all things. There is an inherent religion within their spirituality that is ancient and primal—to value this.

Richard Jarrette is author of Beso the Donkey (Michigan State University Press, 2010)—Gold Medal winner for Poetry Midwest Independent Publishers Association 2011, A Hundred Million Years of Nectar Dances (Green Writers Press, 2015), The Beatitudes of Ekaterina (Green Writers Press, 2017). He is Poetry Columnist for VOICE Magazine of Santa Barbara and his books have been endorsed by W.S.Merwin, Jane Hirshfield, Joseph Stroud, Sam Hamill, and others. He lives semi-reclusively in the Central Coast area of California and is far into his next poetry collection, It Is Never Finished, inspired by the ancient Chinese poets who named names, praised, and preserved.

Susan Solomon is a freelance paintress living in the beautiful Twin Cities of Minneapolis/Saint Paul. She has paintings in the university collections of Metropolitan State and Purdue. She has exhibited art widely throughout the Twin Cities, as well as featured works in many literary publications including the New England Review and Catamaran Literary Reader. Susan loves working with writers, painting impressions of their words, and finds them an endless source of inspiration.