Is this Anything? (CD-Audio) 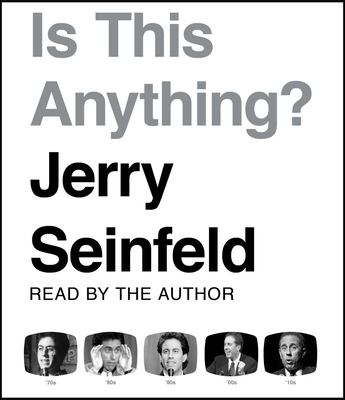 Is this Anything? (CD-Audio)


OUT OF STOCK - Please contact store for expected availability
The first book in twenty-five years from “one of our great comic minds” (The Washington Post) features Seinfeld’s best work across five decades in comedy.

Since his first performance at the legendary New York nightclub “Catch a Rising Star” as a twenty-one-year-old college student in fall of 1975, Jerry Seinfeld has written his own material and saved everything. “Whenever I came up with a funny bit, whether it happened on a stage, in a conversation, or working it out on my preferred canvas, the big yellow legal pad, I kept it in one of those old school accordion folders,” Seinfeld writes. “So I have everything I thought was worth saving from forty-five years of hacking away at this for all I was worth.”

For this book, Jerry Seinfeld has selected his favorite material, organized decade by decade. In this “trove of laugh-out-loud one-liners” (Associated Press), you will witness the evolution of one of the great comedians of our time and gain new insights into the thrilling but unforgiving art of writing stand-up comedy.
Jerry Seinfeld is the author of the New York Times bestsellers Seinlanguage, Halloween, and Is This Anything?.

Jerry Seinfeld is the author of the New York Times bestsellers Seinlanguage, Halloween, and Is This Anything?.
"Gold, Jerry! This audiobook is pure gold! In that one-of-a-kind unforgettable voice, Seinfeld explores 45 years of comedy bits, sorted by decade. Each section begins with a jazzy interlude and a brief introduction narrated by Fiona Hardingham. In what is hours of pure entertainment, Seinfeld's timing is, of course, perfect, and the familiar way that he narrates creates a unique level of intimacy. Listeners will feel like they're in the front row of a show as they imagine Seinfeld's quirky facial expressions and wild hand gestures. Whether they consume this treasure a little at a time or binge-listen, the entire audiobook is one Seinfeld fans won't want to miss."
— Winner of an AudioFile Earphones Award, AudioFile Magazine