The Stahl House: Case Study House #22: The Making of a Modernist Icon (Hardcover) 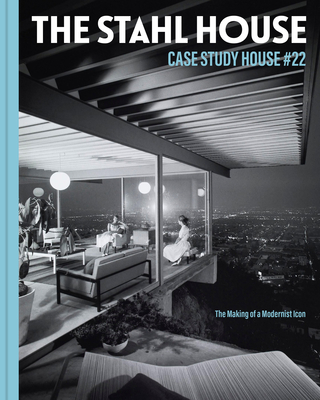 The Stahl House: Case Study House #22: The Making of a Modernist Icon (Hardcover)


OUT OF STOCK - Please contact store for expected availability
The Stahl House: Case Study House #22, The Making of a Modernist Icon is the official autobiography of this world-renowned architectural gem by the family that made it their home.

Considered one of the most iconic and recognizable examples of mid-century modern homes in the world, the Stahl House was first envisioned by the owners Buck and Carlotta Stahl, designed by architect Pierre Koenig, and immortalized by photographer Julius Shulman. This 1960 glass-and-steel home in the Hollywood Hills has come to embody the idealism of a generation in search of the American dream. As one of the Case Study Houses designed between 1945 and 1966 under the vision of John Entenza and Arts & Architecture magazine, this was an affordable yet progressive design experiment to address the postwar housing shortage.

The result—a two-bedroom, 2,300-square-foot house with glass walls that disappear into a 270-degree panorama of Los Angeles—became Koenig's pièce de résistance. The Stahl House broke rules, defied building codes that discouraged building on cliffs, and expanded the possibilities of residential architecture. The glass walls blurred the boundary between indoors and outdoors. The building seemed to merge with the city itself, the lines of the structure aligning with the geometry of the city's gridded streets. "Los Angeles becomes an extension of the house and vice versa," Koenig said. "The house is just a part of the city."

The book shares the never-before-told inside story by the Stahl family's adult children who grew up there and still graciously give home tours to fans from around the world. Through extensive research and interviews, historical information and personal photos are featured. This includes Buck Stahl's initial vision of the home with his own DIY schematic model for how to build on the complicated site. It also includes blueprints, floor plans, and sketches by Pierre Koenig, as well as Julius Shulman's renowned photographs. Additionally, photographs of the house used in high-end, fashion ad campaigns and film and television are also included, cementing The Stahl House's prominence in contemporary culture.
Bruce Stahl and Shari Stahl Gronwald are siblings who grew up in Case Study House #22 and who own and care for it to this day. They generously open their home up to architectural tours and as a film location. Both are committed to honoring their parents' legacy by sharing the full story of how this miraculous home came about.

Kim Cross is an award-winning writer. Her highly acclaimed book, WHAT STANDS IN A STORM, was published by Atria Books in 2015. Her writing has also appeared on CNN.com. ESPN.com, USA TODAY, Southern Living, and many more.
“Bruce Stahl and Shari Stahl Gronwald offer an intimate biography of ‘one of the great architectural wonders of Los Angeles’: the Stahl House, designed by Pierre Koenig and completed in 1960, and the house they grew up in…. Those with an interest in the human side of design and architecture will be captivated.” —Publishers Weekly

“Sumptuous… a startlingly intimate document, chockablock with family snapshots, that goes beyond steel decking, glass walls, concrete caissons, and the geometry of H columns and I beams. It’s a love song to a global icon that was, for the residents themselves, no museum.” —Vanity Fair