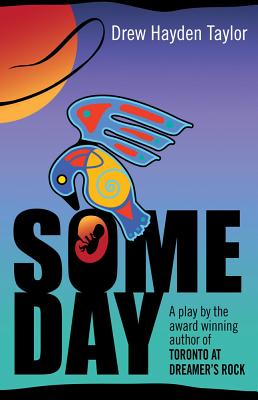 Someday is a powerful play by award-winning playwright Drew Hayden Taylor. The story in Someday, though told through fictional characters and full of Taylor's distinctive wit and humour, is based on the real-life tragedies suffered by many Native Canadian families.

Anne Wabung's daughter was taken away by children's aid workers when the girl was only a toddler. It is Christmastime 35 years later, and Anne's yearning to see her now-grown daughter is stronger than ever.

When the family is finally reunited, however, the dreams of neither women are fulfilled.

The setting for the play is a fictional Ojibway community, but could be any reserve in Canada, where thousands of Native children were removed from their families in what is known among Native people as the scoop-up of the 1950s and 1960s. Someday is an entertaining, humourous, and spirited play that packs an intense emotional wallop.

Drew Hayden Taylor has worn many hats in his literary career from performing stand-up comedy at the Kennedy Center to being Artistic Director of Canada's premiere Native theatre company Native Earth Performing Arts. He has been an award-winning playwright a journalist/columnist short-story writer novelist television scriptwriter and has worked on over 17 documentaries exploring the Native experience. Drew has managed to bridge the gap between cultures by tickling the funny bone.