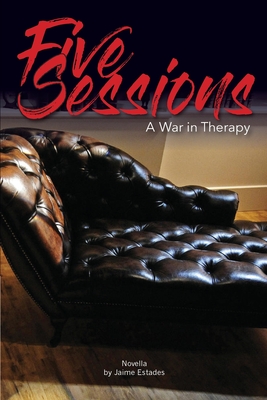 Who of us has not been curious about what takes place between therapist and client. This novella offers much more. James Estades cleverly interrogates the possibility of class biases in psychological theory in his novella Five Sessions.

Christine Adams, an idealistic recent Columbia University graduate from a wealthy West Side New York City family, goes to work as a therapist in an East Harlem non-profit care center. Of course she wishes to "succeed" in her first case: that of a 59 year-old superintendent of a high rise West Side condominium who has attempted suicide three times. She wants this case because it is the most interesting of the cases she is offered her first day on the job.

Her client, however, Vidal Estrella, is a much more recalcitrant and complicated client than she's bargained for - a 70's era social activist, the champion of several lost causes, well read, better educated than he admits, and despairing on a level the 24 year-old can only learn to understand. It is he who asks her the story's key question, "Would slaves in the South have felt better about slavery if they had had therapy three times a week?"

In the end, the story is, for Adam's its narrator, the account of a major disaster. But it's a disaster from which she grows, albeit painfully. She winds up, paraphrasing Estrella's question in her own way. "Now I know we live with a pathology that will never be taught in psychology class." An excellent read for anyone, therapeutic professional or lay person, interested in human communications, conscious and unconscious.